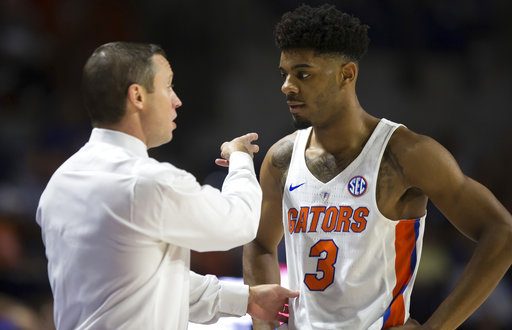 Can The Gators Figure Out Their Offensive Woes?

It wasn’t pretty from the jump on Saturday in Fort Worth as the Gators were overwhelmed by TCU.

Florida didn’t score a basket for the first 5:50 of the game. This set the tone for the rest of the game on the offensive end. UF shot 30% overall from the field and everyone struggled to score.

Nothing We Haven’t Seen Before

Saturday’s offensive ineptitude wasn’t anything that Florida hasn’t seen before as the team’s shooting woes have been a big storyline all season long.

On Tuesday, KeVaughn Allen became the first player on the Gators to score 20 or more points in a game this year with his 31 points. That wasn’t the case against TCU as the senior struggled mightily trying to carry the offensive load himself. Allen was 4-for-13 from the field and 2-for-9 from three for a team leading 11 points. Head coach Mike White was trying to use Allen to create some offense late in the game but did not succeed.

Even the freshman sensation Noah Locke had a hard time shooting the basketball. The Maryland product scored seven points on 2-for-9 shooting. This comes after the Texas A&M game where he scored a career high 27 points.

It seems like Mike White has tried to make a plethora of adjustments to help his offense. However, none of these adjustments have offered a permanent solution.

Nobody could have forecasted Jalen Hudson’s disappearance this season. He went from one of the top scorers in the SEC last year to a below average player.

Today, Jalen Hudson failed to score in double figures despite taking at least seven shots for the ninth time in 19 games this year.

He did that four times last year.

Either he has to be better, or his minutes/shots have to be reallocated … even though that isn't easy, either.

It’s evident that White’s best option moving forward is continuing to let Nembhard, Allen and Locke control the offense. Allen is the best pure scorer on the team. If he is locked in, it allows the Florida offense to go to another level. If not, the Gators don’t have anybody with the ability to create their own shot on a consistent basis.

It doesn’t seem like a lack of offensive sets is as big of an issue as some fans have alluded to. The execution on the offense side of the court just isn’t there this year. The formula for the 2018-2019 Florida Gators is simple: if Allen and Locke are shooting well they can compete with just about any team in the country. If not, the Gators might not even score 50 points.

Previous Gators Struggle Offensively in Loss to TCU
Next Gators look to bounce back against The Razorbacks in Home SEC Matchup.