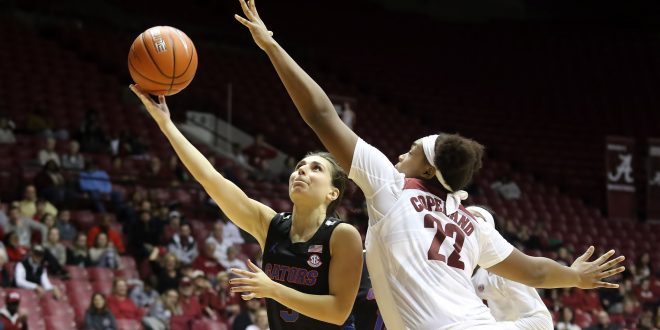 Florida women’s basketball is hoping to snap a five-game losing streak when they host the Alabama Crimson Tide on Thursday.

All of the defeats during that stretch have been by 10 or more points. The team is also coming off a road trip that saw them lose to both Kentucky and Tennessee.

Against the Wildcats on Sunday, the Gators played a fairly competitive game that ended up in a 62-51 defeat. Redshirt sophomore Danielle Rainey has noticed a solid response from her teammates in practice after their recent loss:

In their Jan. 3 meeting with Alabama, UF jumped out to an impressive 25-8 lead after one quarter, which featured a 17-0 run. Their opposition managed to make only three baskets as Florida played stellar defensive in the first ten minutes.

Although Newbauer’s group shot nearly eight percent better from the field than Alabama in the first half, their lead was only seven points after two quarters. The Crimson Tide continued to slice at the deficit and even took a two-point edge heading into the final period. All in all, Alabama outscored Florida 43-24 after the Gators jumped out to a sizable lead earlier on in the game.

Funda playing some inspired basketball here in the second half. The Aussie has 13 in the second alone and the Gators and Crimson Tied are locked at 63 all. pic.twitter.com/5LaCdKYNR5

The combination of a triple by Delicia Washington and a pair of free throws by Funda Nakkasoglu gave the Gators a short lead with less than four minutes in the game. Unfortunately for Florida, Alabama went on a 13-4 run to close the game and hand them their first conference loss of the season.

While speaking to reporters on Wednesday, Newabuer said the Gators have improved as a team since that early January defeat.

While the Gators did lose their first matchup against the Crimson Tide, there are some positives to take away from the game.

Alabama shot an efficient 9 of 18 from behind the arc, but the team has shot only 32 percent on three-pointers this season. A strong case could be made that Florida would have won had they limited their opposition’s perimeter shooting, so that will be an important area to pay attention to.

Along with giving up too many three-pointers, UF sent Alabama to the line an incredible 22 times during that loss. The Crimson Tide made 17 of those attempts and are shooting 70 percent on their free throws for the season. They make it to the line approximately 19 times a game, so Florida will need to stay out of foul trouble as much as possible.

Coach Newbauer discussed the importance of his team being able to also get to the line and convert on those opportunities:

Getting Danielle Rainey and Funda Nakkasoglu rolling on offense is another key to this game as well. In the Gators’ three highest scoring performances in SEC play, the two have combined for at least 26 points.

Tipoff for Thursday’s game against the Crimson Tide at the O’Connell Center is set for 7 p.m.

After Alabama, Florida will have their third road matchup in four games when they head to Georgia on Sunday.