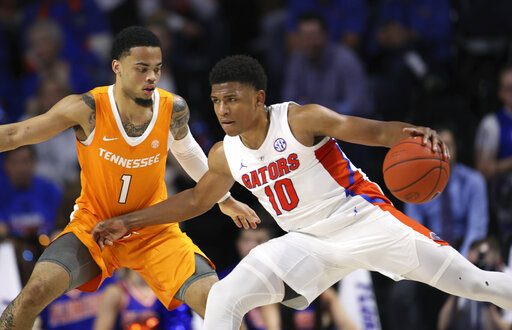 Amid Disappointing Season, Noah Locke Continues to Shine for Gators

After a double-digit road loss to Tennessee on Saturday afternoon, the Gators fell to 4-6 in the SEC. It has been a tough season for the Gators, but Noah Locke has certainly been an unexpected story of success.

From Freshman to Starter

When Locke was being recruited to play at Florida, head coach Mike White was honest and told him that it “may be a challenge” for him to earn decent minutes in his first year. However, as the season has progressed, this has not been the case. White has said several times that he is going to play whoever earns the minutes. Locke has definitely earned all of the minutes he’s receiving. When asked about the 6-4 guard out of Maryland, White said that “Noah has exceeded expectations.”

Locke has proved to be one of the most effective offensive players on the team. So far this year, he’s averaging 11.4 points per game and shooting a red-hot 42.1% from beyond the arc. Locke’s spacing is a key part of Florida’s offense. He’s made 66 threes this year and is on track to break the record for most three-pointers made by a Florida freshman.

As the season has progressed, his role has continued to develop and expand. Locke has scored in double digits in 12 of Florida’s last 14 games. In that span, he’s scored 15 or more seven times, including his two high scoring outbursts of 27 and 22 points. In the Gators’ recent loss to the Tennessee Volunteers, he led the team in scoring with 17 points and hit five threes in a tough road environment.

Locke has already proved to be an effective shooter and scorer in college basketball. While he strives to improve his game, there are certain areas he can get better in. Like many freshmen, Locke has room to become a better finisher in the paint. His three-point percentage is actually higher than his shooting percentage from inside the arc.

If he can continue to work on scoring inside and finishing at the rim, he will continue to flourish. In addition, Locke has to continue to try and feel more comfortable on the defensive end. He has a track record of being able to improve his game. Teammate Keyontae Johnson, who played with Locke at the Providence Elite Camp, spoke about the player Noah has become since they played together a few years ago:

Locke has the potential to be one of the best scorers in the country if he continues to develop and put the work in.