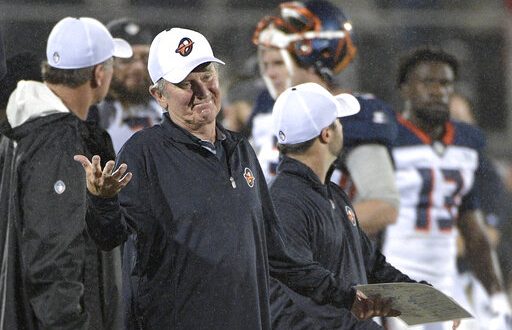 Orlando Apollos coach Steve Spurrier reacts after a play during the second half of the team's Alliance of American Football game against the Atlanta Legends on Saturday, Feb. 9, 2019, in Orlando, Fla. (AP Photo/Phelan M. Ebenhack)

Apollos Light It Up on the AAF’s Opening Night

A little wind and rain couldn’t scrub the launch of the Orlando Apollos and the Alliance of American Football.

The Apollos defeated the Atlanta Legends in decisive fashion by a score of 40-6 to kick off the commencement of AAF’s inaugural season.

The first day of this opening weekend might have shown that fans can seemingly have football all year between the AAF, NFL and NCAA. An idea that recalls memories of the USFL.

It marked the reemergence of Steve Spurrier in the game of football. The Head Ball Coach took the sideline for the sixth different team in his coaching career.

It was a homecoming of sorts for Spurrier. He hadn’t coached a team from the state of Florida since he left the University of Florida after the 2001 season for the Washington Redskins.

So @SteveSpurrierUF said this Saturday night after his 40-6 victory with the AAF Orlando Apollos left him 6-0 for his career in debut coaching games: “I even won with the Redskins, and that’s not easy to do.”

He wasted no time dialing up play calls. Orlando’s first play from scrimmage was a deep post over the middle of the field. Starting quarterback Garrett Gilbert’s pass fell incomplete past two safeties and his intended receiver.

“I made up my mind I was going to call the ball plays,” Spurrier said postgame about his first down play call. “… and they had a little different coverage than we thought they were going to be (in).”

His play-calling prowess didn’t stop there. From five yards out, the Apollos ran a play that, for many fans, is all too familiar now.

Not only did fans see Spurrier’s signature play-calling style, but also his signature commentary.

Gilbert’s first pass fell incomplete, as did the next five or so. But, he got on track later in the game with a strike to Jalin Marshall for the first touchdown in Alliance history.

A former Texas Longhorn and SMU Mustang, fans might remember Gilbert taking over for an injured Colt McCoy in the 2010 National Championship against Alabama.

He finished 15 of 25 for 227 yards, two passing touchdowns and one receiving touchdown for the Apollos Saturday night.

“It was a lot of fun, a lot of fun to be back out there,” he said. “I think once you get into the game, it doesn’t feel like your first time playing in a long time.”

Gilbert’s backup and former Gator QB Austin Appleby got to see some playing time in the game’s later stages when it was well-decided.

While Gilbert is taking it one day at a time and not focusing on a return to the NFL, Appleby sees it as an opportunity for players to get back to the league.

Appleby on the opportunity:

Gator fans might have also recognized players like Will Hill III and Earl Okine making plays. Okine finished with five total tackles, a sack and tackle for loss while Hill had seven tackles and a pass breakup.

“Hopefully we can all show the evaluators in the NFL that we deserve an opportunity to get back into the league,” Appleby said.

Even the Alliance’s Head of Strategy, Jeff Fisher attended the contest. He saw good aspects while maintaining that there is still room for improvement in the AAF.

He pointed out issues with apps and other technologies as the problems they need to improve upon. But, he was pleased with the game’s pacing.

Fisher on the significance of the game:

He said the creation of the AAF was based around giving the players an opportunity.

Orlando wideout Jalin Marshall’s perspective aligned with Fisher’s. He thanked God for another opportunity to “play this great game” and called it “another dream come true.”

“They have set up a league in the Alliance that has placed the players as the No. 1 priority,” Fisher said.

Gilbert even said the pace took some getting used to, but he thinks enough has been done to win over fans to come back for week 2.

“I really think a lot of the reactions were real positive tonight,” he said. “Everyone seemed to be real excited about the way the game way went. Again, the speed of it, the TV timeouts, having some guys mic’d up on the sideline. I think that’s a lot of fun and I think the game speaks for itself and the level of play. I think that’s what’s going to draw people to come watch these games.”

Previous Amid Disappointing Season, Noah Locke Continues to Shine for Gators
Next Rams beat rival Hurricanes in a close one, 50-47