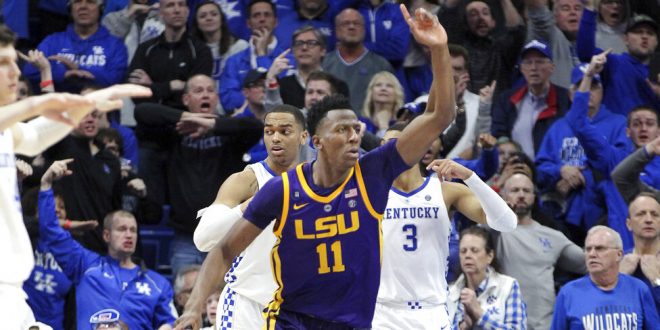 LSU Wins At The Buzzer Over No. 5 Kentucky

The LSU Tigers came out victorious against the Kentucky Wildcats last night on controversial tip in by senior Kavell Bigby-Williams. Thanks to that final play, No. 19 LSU edged out Kentucky 73 -71.

Many believed the tip in at the buzzer was very close to being goaltending. Unfortunately for Kentucky fans, the play was reviewed for time on the clock and not for goaltending.

Was the ball still in the cylinder or not?

Defensive Struggles in The First Half

The Tigers went into last night’s game having the opportunity to play spoilers and snap Kentucky’s 10 game winning streak. That would be no small task since the Wildcats are 13-0 at home.

The Tigers wanted have a bigger presence on the glass and out-rebounded Kentucky 18-16. LSU grabbed its first lead with eight minutes left in the second half on an Emmitt Wiliams lay-up.

The Tigers were able to come back in the game due to having multiple players score double digits. LSU in total had four players with 10 or more points and Tremont Waters led the scoring and ran the offense with 15 points, five assists and three steals.  The biggest advantage LSU had was their bench that outscored Kentucky’s 12-2.

John Calipari: I don’t want to take anything away from LSU. To come in here and (play the way they did) they deserved to win the game. As for the last play, “You have to judge it yourself.”

After the win, LSU is now second in the SEC standings. They are only one game behind Tennessee as the Volunteers are undefeated in conference play while LSU has one loss in their conference record.

Kentucky’s next game is against Tennessee this Saturday in another home game at Rupp Arena. LSU will continue to play on the road as they take on the Georgia Bulldogs next. 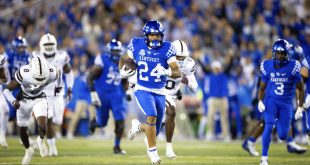