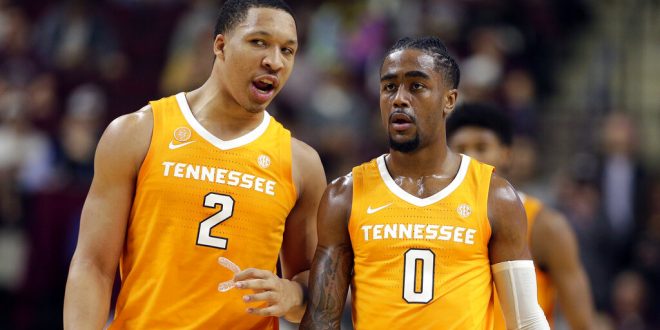 Tennessee forward Grant Williams (2) and guard Jordan Bone (0) talk as they head to the free throw line after a foul during the first half of an NCAA college basketball game against Texas A&M, Saturday, Feb. 2, 2019, in College Station, Texas. (AP Photo/Michael Wyke)

Vols looking for 19th straight with Gamecocks coming to town

The No. 1 Tennessee Volunteers will look to continue their domination over the SEC tonight as the South Carolina Gamecocks travel to Knoxville. The Vols’ enter Wednesday’s contest as the hottest team in the country, currently on a 19-game winning streak.

The Vols’ are currently 22-1, 10-0 in conference, with their only loss being to Kansas back in November. As for the Gamecocks, they’ve turned things around in conference play. At 12-11 overall and 7-3 in SEC play, the Gamecocks will look to pull off a massive upset.

This will be the second meeting between the two teams this season. The Vols’ took care of the Gamecocks easily at the end of January, winning 92-70 on the road.

Clicking on all Cylinders

Going on a 19-game winning-streak is an impressive feat for any team to accomplish. And in the Vol’s case, they aren’t skating by teams. They are winning games soundly and dominating their competition.

On their streak, 16 of Tennessee’s wins have been by double-digits. Can they add another double-digit win Wednesday? The Vols enter as 15-point favorites over the Gamecocks.

It’s tough to say they can fend off the Vols’, but anything can happen. The Gamecocks are a well-coached team by Frank Martin and seemingly play up to their competition most times. However, this next task might be the toughest they’ve seen. The No.1 team in country on their home court.

The Vols’ have been led this season by the play of forward Grant Williams. The reigning SEC player of the year, Williams has put himself in great position to earn the honor once again.

On the season, Williams is averaging 19.9 points per game while grabbing 7.3 boards. And the junior is in good form, averaging 18.6 points over the last five games.

Tip-off between the Vols’ and Gamecocks is set for 6:30 p.m. from Thompson-Boling Arena in Knoxville on SEC Network.