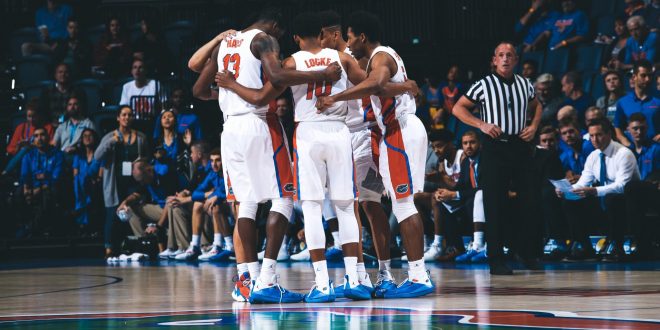 The Florida Gators’ men’s basketball team defeated the Vanderbilt Commodores at home by a score of 66-57.

The Commodores haven’t played in many close games as of late. Tonight marks their 12th straight loss. Of their previous 11 losses, only 4 of those have been within single digits. However, Vanderbilt held a two point lead at the end of the first half. For Mike White and his squad, it was just another slow start. The Gators were able to pull away eventually for the nine point victory. Keyontae Johnson gave the Gators a 34-33 lead just 44 seconds into the second half, and Florida never relinquished that lead. Johnson mentioned after the game what he thought changed for his team down the stretch:

Senior guard Jalen Hudson, who finished with 10 points and 3 steals, spoke about Mike White’s message to the team at halftime that sparked a much improved second half:

A Night of Frustration for Some

The Gators got the win, but it was quite a frustrating performance for multiple players. Andrew Nembhard and Kevarrius Hayes both dealt with foul trouble for the entire game. They each had four fouls, and Hayes was limited to just 13 minutes while Nembhard played just 16. Without Nembhard on the floor for much of the game, Florida’s other offensive threats had difficulty creating easy opportunities.

KeVaughn Allen, the Gators’ leading scorer, had just six points on 1-9 shooting. Hot-shooting freshman Noah Locke had one of his worst performances of the season with three points on 1-10 shooting, including 1-9 from beyond the arc. As a team, Florida shot just 33% from the field and 23% from three. With the team’s leading scorers not playing well, other guys had to step up. Keyontae Johnson was one of those guys. He had 15 points, 9 rebounds, and came up with a huge steal with about two minutes left in the game. For coach White, his bench played a crucial role in the win:

Defense Does the Job

The Gators’ offense was ice cold tonight, but their defense seemingly carried them to a victory. Lost in the midst of a close game was the fact that the Gators put on a lock-down performance on the defensive end. They held the Commodores to 57 points on 35% shooting. Florida forced 12 steals and created 19 Vanderbilt turnovers. The Gators put the clamps on down the stretch and held Vanderbilt to just 24 points in the second half.

A Much Needed Win

It’s desperation time for the Gators at this point in the season. With this win, Florida now sits at 13-11 overall and 5-6 in SEC play. This win was a crucial one for the Gators. A loss to the the 9-14 Commodores would have been a big hit to Florida’s postseason hopes. Next up for Florida is a road test against the Alabama Crimson Tide on Saturday at 2 p.m EST.