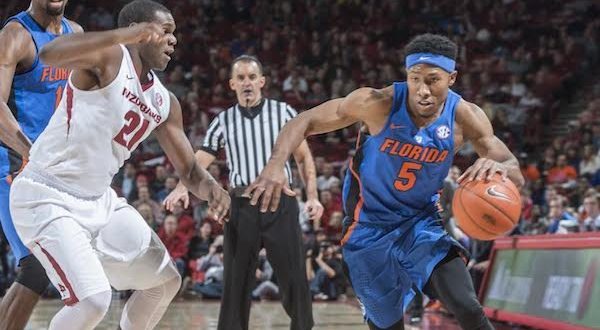 Gators Head to Tuscaloosa to Take on Crimson Tide

The Florida Gators are looking to win their second straight game as they face off against the Alabama Crimson Tide on Saturday afternoon. The Crimson Tide sit at 6-5 in the SEC, while the Gators enter the game at 5-6.

What to Expect From Alabama?

Alabama is paced by Kira Lewis Jr., John Petty and Donta Hall. Lewis Jr. is leading the team with 14.4 points per game. Petty is averaging 11.2 points per game and Hall is putting up 11.0 points, 8.6 rebounds and 1.9 blocks per game.

They rank in the top 75 in offensive and defensive efficiency. Unlike the Gators, they are significantly better on the offensive end. They have an offensive efficiency of 111.5, which ranks 46th in the country. The Crimson Tide grab 38.1 rebounds per game, which is 5th in the SEC. However, they got out-rebounded 35-26 in their 19-point loss to Mississippi State on Tuesday night. While Florida ranks dead last in the SEC with only 34.2 rebounds per game, they are still a threat on the offensive glass. Alabama must limit Florida’s second chance opportunities by controlling their defensive rebounds.

They don’t do anything exceptionally well on the defensive end, but they are still an above average defensive team. They have a block percentage of 12.7%, which is 41st in the country. Much of this defensive interior presence comes from 6’9″ Donta Hall. The senior has a 7’2″ wingspan and has become one of the most feared shot blockers in the SEC. He was on the 2018 SEC All-Defensive team.

Before their victory on Wednesday night over Vanderbilt, the Gators undoubtedly had their toughest three game stretch of the season against Kentucky, Auburn and Tennessee. They were unable to come up victorious in any of those games. However, it could potentially help the Gators in the long run by making them mentally tougher for the final stretch of games before the postseason.

With the Gators sitting on the NCAA Tournament bubble, they must take advantage of every possible upcoming opportunity. This certainly starts with Alabama on Saturday afternoon, but the team needs better performances from their two leading scorers, KeVaughn Allen and Noah Locke.

Both struggled mightily against Vanderbilt. The two combined to score 9 points on 2-19 shooting, including 1-13 from beyond the arc. Allen had scored in double digits in every single SEC game before this poor performance.

After the game, Mike White insinuated that Noah Locke has been playing through an injury, but wouldn’t disclose the nature of it to protect his player from potentially being targeted in that area in the future.

Between these two sharpshooters struggling and playmaking point guard Andrew Nembhard being limited to 16 minutes because of foul trouble, the Gators really struggled to create any type of offense. They were bailed out by Keyontae Johnson, who tied his career high with 15 points. The freshman has really come on strong as of late.

"Getting to the free throw line will be big…in the last 8 or so games in the SEC"#Compete #GatorsHoop #GoGators pic.twitter.com/GzOTpGATIv

The Gators continue to ride the same storyline all year. Their defense keeps them competitive in just about every game, while their offense struggles mightily. Lack of execution down the stretch has caused the Gators to lose numerous games that they should have won. While this wasn’t the case against Vanderbilt, it wouldn’t be surprising to see their offense stall late in Tuscaloosa.

Previous No. 6 Gators Lacrosse Drops Home Opener to No. 2 Maryland
Next Eight Former Winners Set to Compete in the 61st Annual Daytona 500