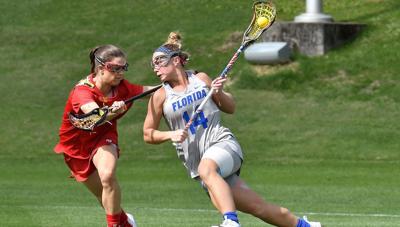 No. 6 Gators Lacrosse Drops Home Opener to No. 2 Maryland

The No. 6 ranked Gators lacrosse team fell to the No. 2 Maryland Terrapins, 12-17, on Thursday night at Dizney Stadium.

Ronbeck put up a career-high eight goals against the Terps to tie Florida’s program record for most goals scored in a game by a single player.

The Terps dominated the beginning of the first half, taking an early 5-0 lead with 23:16 left on the clock. Maryland’s lead was cut short as the Gators came back to score four unanswered goals.

Sophomore attacker Grace Haus put the Gators on the board with back-to-back goals shortening the Terp’s lead to 3-5.

.@gracehaus with another goal to cut the lead to 3!

Florida kept up the momentum with two additional goals from senior midfielder Sydney Pirreca and Ronbeck bringing the score to 4-5.

Maryland responded with two goals of their own from seniors Jen Giles and Caroline Steele, putting the Terps up 4-7. Both Giles and Steele would end the night with four goals each.

Ronbeck scored the last goal of the half on an assist from Pirreca to put the Gators within two of the Terps, 5-7, heading into halftime.

The second half opened up with a goal by Ronbeck with an assist from freshman attacker Hannah Mardiney. Mardiney had a career-high four assists, all to Ronbeck.

“There is a natural cohesion [between Ronbeck and Mardiney] and you could see it tonight. They weren’t even making eye contact and the ball was getting out of Hannah’s stick and into Lindsey’s,” head coach Amanda O’Leary said.

From there, Maryland scored six unanswered goals to put the Terps up 11-6 with 19:53 left in the game. The Gators couldn’t manage to overcome the deficit.

Ronbeck led the Gator’s offense, scoring six of her eight goals in the second half. Gaus added a goal to end the night with a total of three goals.

See the full interview from coach O’Leary and Ronbeck below.

.@amandaoleary5 & @lindseyronbeck spoke with the media after tonight's game with Maryland. Hear what they have to say ⬇#GoGators #FLax pic.twitter.com/vN399u0YyL

The Gators will take on the Scotland National Team in an exhibition game Saturday, February 16 at 1 p.m. at Dizney Stadium.

Florida will return to regular season action Saturday, February 23 as they travel to No. 9 Loyola.