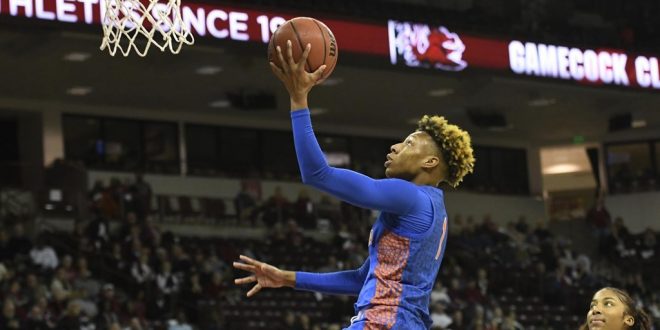 After playing three out of their last four games on the road, Florida women’s basketball will return to the O’Connell Center on Sunday.

This weekend’s matchup versus South Carolina won’t be easy for the Gators as the Gamecocks enter this game with an 18-6 record on the season. South Carolina, currently ranked at No. 11 in the nation, also defeated Florida in blowout fashion on Jan. 10.

Although UF has 18 losses, one advantage for the team heading into this SEC battle is that they are 6-6 at home.

Florida suffered their third-largest defeat of the season when faced South Carolina in January.

The Gators lost that game 71-40 after shooting just over 25 percent from the field and only 20 percent from behind the arc. A glaring problem for the team was the first and third quarters, where they were outscored 43-17.

On the other side, the Gamecocks were efficient in their shot selection and dominated the backboards. As a team, they shot nearly 47 percent from the floor and connected on 8 of their 20 three-point attempts. In the rebound department, South Carolina outrebounded Florida 45-31 in the game.

Although UF struggled on the glass and did not click offensively, assistant coach Kelly Rae Finley believes the team has improved since that game:

A bright spot for Florida in their road loss against South Carolina was the play of Kiara Smith. The sophomore guard has put up six double-digit performances in SEC games this season, including a 15-point outing against Georgia on Sunday.

Smith believes that she and her teammates are gaining confidence every time that they take the court:

South Carolina comes into this game with 10 wins and just one loss in conference play this year.

In order for Florida to be more competitive this time around, they will need to limit the Gamecocks’ offensive efficiency. Their upcoming opponent scores over 75 points per game, shoots over 43 percent from the field and are capable free throw shooters. South Carolina also gets it done defensively as they average nearly nine steals per game and over six blocks a contest.

Finley mentioned that the Gators will need to be able to battle through adversity on Sunday:

Along with playing good defense, the Gators want to get their best scorers more involved against South Carolina. Last time against the Gamecocks, UF received just 13 points combined on 5 of 21 shooting from Delicia Washington and Funda Nakkasoglu, the team’s leading scorers.

For Washington, her mentality coming into this rematch is to ignore her opponent’s ranking and focus on winning the game:

Florida’s game against South Carolina on Sunday is scheduled to tip off at 2 p.m. The Gators won their last game at the O’Connell Center when they defeated Alabama 57-55 on a game-winner by Washington.

After their conference matchup versus the Gamecocks, Florida will hit the road again and take on LSU this upcoming Thursday.