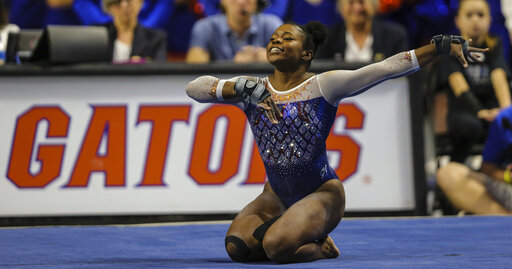 It took 40 years and 16 dual meets, but Florida finally claimed another road win in Tuscaloosa.

How Florida made it happen

It wasn’t the usual recipe that made it happen for the Gators. They struggled on uneven bars for their lowest score of the season with 49.175. Alabama found themselves in a similar position over at vault. They’d close out the neck-to-neck first rotation tied with the Crimson Tide.

Even so, Florida saw improvement on vault, the season’s Achilles heel. They followed up their best vault performance of the season against Auburn last week with their second-highest total of 49.30. Freshman Trinity Thomas earned her first vault title of the season by posting a 9.9. Sophomore Alyssa Baumann was introduced into the lineup for the first time this season and earned a collegiate-best 9.875. Meanwhile, Alabama couldn’t get much going on uneven bars, and fell behind Florida in the second rotation. The Gators marked the lead, 98.475-98.350.

Florida peaked on floor, where a budding momentum was finally unleashed. The Gators earned the second-highest total in program history with a 49.725. Senior Alicia Boren earned a 9.975, marking her collegiate-best on the event. Thomas also earned a 9.975, followed by Baumann’s 9.95 and freshman Nya Reed’s 9.925. Alabama’s rotation on beam didn’t look much better than bars, keeping them behind Florida at 148.200-147.025.

Floor served as the evening’s highlight for the Gators. The beam was an iffy closing rotation, which is unusual for the 2019 Gators. An overall score of 49.125 was calculated, where Thomas and sophomore Megan Skaggs led the effort with 9.9s. Boren and junior Amelia Hundley, who frequent the beam lineup, individually found trouble and had their scores left out of the final calculation. Boren earned a 9.575, while Hundley put up a 9.175. Alabama’s floor scores in the last rotation simply couldn’t compete.

Thomas earned her second all-around title of the season with a 39.525, with Alicia Boren right behind her at 39.20.

The Florida Gators will return home for their final SEC home matchup this season against Georgia on Friday, Feb. 22 at 6:45 p.m.