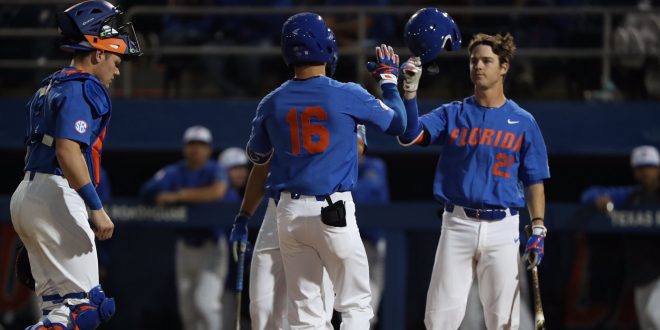 After dropping two mid-week matches against USF and UNF, the Florida Gators are set to host the 4-0 Miami Hurricanes this weekend.

Florida looks to overcome early season inconsistencies at the plate in a three game series against the undefeated Hurricanes.

In their latest loss, UNF used a trio of home runs to take down Florida 7-1 on Wednesday night.

What do #Gators do when we get knocked down? Go to work. #BeatMiami #GoGators pic.twitter.com/8A7U70TEBU

Right-hander Tyler Dyson will be on the mound for Florida in hopes that his struggles with consistency in the season debut against the Long Beach Dirtbags won’t repeat.

In their first road trip of the year, USF beat Florida 6-1 in Tampa on Tuesday night. Whereas, UNF defeated the Gators 7-1.

Florida’s struggles at the plate during their mid-week match-ups proved to be their biggest weakness. Overall, the Gators are batting at an average of .203.

Improving upon early season inconsistencies will be the key in the Gator’s quick turnaround this weekend.

After scoring 35 runs on opening weekend, the University of Miami baseball team is coming into Gainesville with their bats hot.

In addition, the Hurricanes scored 10 runs from the third to the sixth inning to secure their fourth straight victory to open up the 2019 season. Their latest win snapped a three-game losing streak to FAU and insured that Miami enters the series match-up this weekend undefeated.

The Hurricanes, led by first-year head coach Gino DiMare, enter into this weekend’s series with a .257 team batting average. DiMare, who’s been with the program for 20 years, made an effort to focus on improving at the plate.

Furthermore, coach DiMare highlighted that the strength of this Hurricanes team has been the unexpected talent that has come out of the bullpen.

Junior transfer Brian Van Belle had a standout performance against Rutgers and will be expected to take the mound this weekend. Van Belle pitched six innings and recorded five strikeouts and five hits.

Slade it on the mound and with the bats last night.

Now it's time to head to Gainesville. pic.twitter.com/Y0zTS3A0uD

Plus, Florida has won four series in a row against the Hurricanes dating back to 2015.

ESPN 98.1 FM & 850 AM WRUF will have coverage of Friday’s game beginning at 6:25 p.m., but you can catch the game streaming live on SEC Network+ via the WatchESPN app.