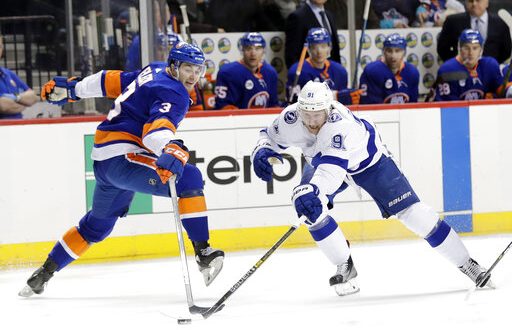 Cool became the rule on the airwaves of WRUF.

ESPN analyst Barry Melrose joined Sport Scene with Steve Russell to give his thoughts on the NHL just days before the trade deadline.

Who’s the Best in the NHL?

Melrose’s answer to this question was a simple one: the Tampa Bay Lightning.

“They are the best team in the NHL, and by quite a bit,” he said.

Tampa Bay currently paces the league in points at 96. The next closest team in the conference is Boston at 80 and in the whole NHL is Calgary at 81.

It has the league’s best record at 46-11. That’s 10 wins better than second place Boston.

That depth allows Tampa Bay to sit players for a game to give them time to rest and get fresh. Melrose said the Lightning tends to have two or three healthy scratches and sit one defenseman out a game because their lineup is so healthy.

Nikita Kucherov, Brayden Point and Steven Stamkos all sit among the Top 10 in total points this season. Kuchervov paces the league with 99.

Teams will be looking to add pieces and players will be on the move in the coming days with Monday’s trade deadline looming.

Here are some players Melrose thinks will be highly pursued by teams:

He even mentioned that the Lightning might make some moves at the deadline.

The Blues are Red Hot

He even commented on the meteoric rise of the St. Louis Blues, winners of 11 straight and stand fifth in the Western Conference.

We're running out of words to describe this team and this run. #stlblues pic.twitter.com/TnybkBPis6

Melrose said St. Louis was pegged as a contender in the preseason. But, it started 7-9-3 and head coach Mike Yeo was fired back in November. Things have changed under interim coach Craig Berube. They’re averaging almost four goals scored and allowing less than two over this 11-game winning streak.

He pointed to the Edmonton Oilers and Florida Panthers as examples of under-performing teams in the 2018-2019 season.

Melrose on the Oilers:

Both rank in the top five in goals against per game but still average below that number in the goals for category. Florida is 12th at 3.07 GF per game and Edmonton is 26th with 2.75 GF per game.

Melrose on the Panthers:

The Class of the West

The Lightning are the front runners for the East’s crown with a doubt. But, who would is out conquering the Wild West?

Melrose pointed out teams like Winnipeg, Nashville, and San Jose. Although, they all trail the Western Conference leader in the Calgary Flames.

Winnipeg and San Jose are top ten in goals scored per game. But, one team Melrose said could be dangerous is the Chicago Blackhawks. Right wing Patrick Kane has the second highest points scored this season at 92. His 38 goals trail leader Alex Ovechkin by four.

Melrose on the Blackhawks: