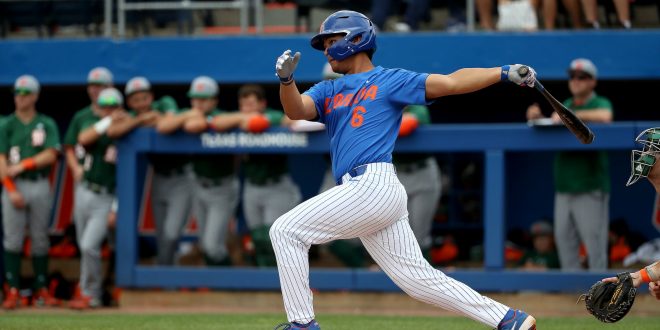 Gator Baseball Bounces Back in Series Win Over Miami

After making a statement against the University of Miami Hurricanes on Saturday night, the Florida Gators came into Game 3 on a mission beat their rival.

The No. 3 Gators took the series in a must-win game against the Hurricanes on Sunday afternoon in McKethan Stadium, winning 4-1.

Florida pitching keeps up the momentum

Above all, Florida has struggled to get the things going in the first couple innings. In Sunday’s match-up this proved not to be the case.

Sophomore right handed pitcher Jack Leftwich had a strong showing against Miami. Through five innings, Leftwich pitched a career-high seven strikeouts and gave up five hits, including one run.

Additionally, Leftwich opened up the game with back-to-back three up, three down innings. Miami stayed scoreless through three innings.

Easy as 1-2-3 for Jack in the first.#Gators due up: McConnell, Langworthy, Dalton pic.twitter.com/HtW6g9DN54

In the fourth inning, Leftwich gave up a solo home run to Miami’s Adrian Del Castillo. However, this would be the Hurricanes only score of the day.

Miami continued their momentum, putting together a series of singles to load the bases. However, Leftwich regained his composure to strike out Jordan Lala to end the top of the fourth.

Left-hander Jordan Butler went onto the mound for the Gators in the fifth inning. Butler pitched three innings, giving up three hits and recording one strikeout.

Butler noted the confidence that the Gators have moving forward after winning the series over Miami.

Calilao dominates at the plate

For the first time since their opening game against Long Beach State, the Gators scored a run in the first inning.

Florida freshman Kendrick Calilao continued to be a presence at the plate. In the first inning, the Gators got an early 1-0 lead after a single from Calilao brought home junior Austin Langworthy.

In the fourth, the Gators added another run after Miami bobbled a throw to first. A single from senior Blake Reese would advance freshman Cory Acton in for the run.

In the bottom of the sixth, Calilao hit a bomb to right field for a solo home run, putting Florida up 3-1. As a result, Calilao ended the day three for four at the plate, including two RBI.

How about an oppo 🌮 for your birthday!! Happy birthday Kendrick Calilao!

The freshman now has SIX RBI in the series against Miami‼️

Calilao discussed his continued success at the plate.

At the bottom of the eighth, Reese singled in Calilao to put the Gators up 4-1 over Miami.

The Gators hit the road to take on Jacksonville University on Tuesday night. The first pitch is set for 6:00 p.m.

Furthermore, you can catch live coverage of Florida’s match-up against JU on ESPN 98.1 FM/850 AM.