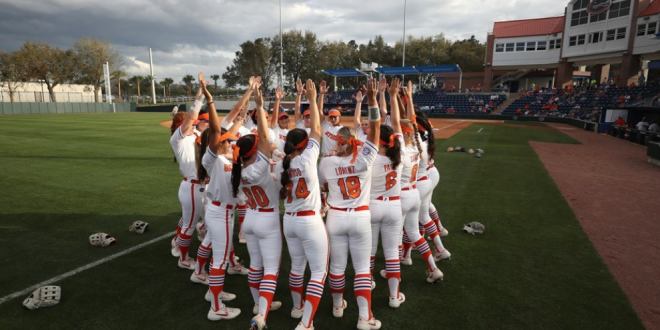 The third-ranked Florida softball team continues its undefeated start to the season with its 15th and 16th straight wins as they continue to host the Bubly Invitational.  The Gators picked up a pair of eight-run wins over Illinois State and Syracuse on Saturday; Florida moved to 4-0 against the Redbirds on the season with a 10-2 win. Afterward, they shut out the Orange 8-0.

Florida’s senior center fielder Alex Voss had a day to remember at the plate for the Gators. She finished the day a combined 5-for-8, with six RBIs and two runs scored with three extra-base hits including her first career home run.

That three-run shot helped blow the game against Illinois State open at 5-1. She even sprinted around the bases on her way home after doing something that was 155 games and 127 at-bats in the making.

Voss on her first home run as a Gator:

Gator coach Tim Walton said the multi-dimensional aspect of Voss’s game allows him to do more offensively. She has the ability to now hit the ball out of ballpark, lay down different bunts and hit the ball to the gaps.

Walton’s reaction to the homer:

“Gosh, I was so pumped for her. She’s been hitting a lot of home runs in practice, so we were joking around, ‘it’s going to happen, it’s going to happen,'” first baseman Amanda Lorenz said. Everyone was so pumped getting out of that dugout for her as she’s sprinting around the bases. It was awesome, so excited for her. She deserves all the success that she’s getting.”

Voss on how she hopes to perform going forward:

Florida already has 18 home runs on the season, eight more than the total they had at the same point in the 2018 season. Lorenz leads the Gators in home runs with five. She is almost halfway to the total (11) she posted all of 2018.

Lorenz on the team’s approach at the plate:

She went 3-for-9 with two runs scored, four RBIs and a home run on Saturday. Walton changed the lineup for the doubleheader starting Lorenz in the leadoff spot.

“That’s where I’ve hit most of my life,” she said. “I really like hitting lead off. I’m really OK with wherever Coach Walton thinks that will produce the most runs for our team.”

Voss on hitting homers at home:

After hosting this tournament the Gators will hit the road again on the west coast.  Walton’s squad often boasts a number of players who call the Golden State home, five in fact, including four key players:

Lorenz on the California natives going back home:

Florida faces UCLA on Wednesday and then takes on a host of teams in the Judi Garman Classic. But, Lorenz said the team is focused on their Sunday rematches with Syracuse and FAMU.

“Every game is important,” she said. “You can’t take any opponent too lightly. (We’re) thankful for our coaching staff putting together a really good preseason schedule.”