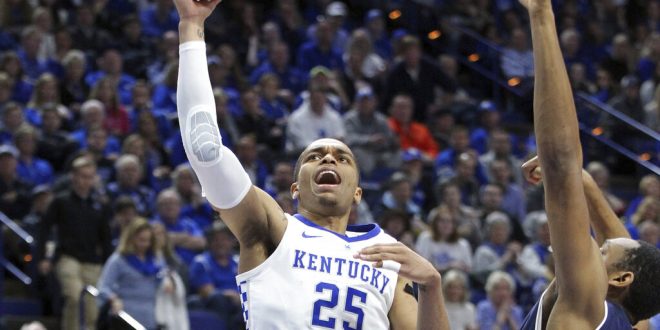 The no.4 Kentucky Wildcats (23-4, 12-2 SEC) are set to take on the Arizona Razorbacks (14-13, 5-9 SEC) at the Rupp Arena on February 26th at 9 p.m. Kentucky enters this game as the heavyweight favorite against rival Arkansas with only one SEC loss since January 5th. That one loss to LSU on February 12th is one of only two losses to an SEC opponent this season.

The season stories for these teams are near polar opposites. The Wildcats are climbing in the rankings and making a case to be number 1 in the AP Poll. Arkansas, on the other hand, saw their 10-3 record to start the season implode are now fighting to stay above .500. Conference play has shown the worth of one team and revealed the weaknesses of another.

When the Wildcats fell short in a rally against Alabama on January 5th, their record was nearly identical to Arkansas’ (the only difference was Arkansas was 1-0 in SEC play while Kentucky was 0-1). Since then Kentucky has won 13 of their last 14 games and has moved up from no. 13 in the rankings to no.5. Any close game down the stretch seems like an outlier with Kentucky winning by double digits seven times. They’ve won by 20 points or more five times. Their biggest win by far was their 86-69 victory against the no. 1 Tennessee Volunteers.

Kentucky as a team ranked 4th in SEC in points per game (78.3), 4th in free throw percentage (74.7%), and 2nd in field goal percentage (48%). Their success has mainly been in the paint with Kentucky towards the bottom of the SEC in most three-pointer categories (though this can be attributed to Kentucky not shooting a lot of three-pointers as a team in general).

The Razor in Razorbacks Needs Sharpening

Since defeating Texas A&M for their first SEC game of the season, the Razorbacks have been crushed in SEC play going 4-9. The Razorbacks have suffered tough losses losing half of their games by single digits. One loss was decided by a single point.

Since their losing streak started, the Razorbacks have gone 1-3 against ranked teams. Three of those matchups have been conference games. All of the losses in their five-game losing streak have been against conference opponents. Playing Kentucky likely won’t help stop the bleeding.

This game may seem like a shoo-in for Kentucky, but that doesn’t mean Arkansas won’t put up a fight and make a game out of it. Both of the Razorbacks most recent matchups against ranked teams have been decided by single digits including a 9-point win against LSU. Kentucky is the favorite, but the game is still going to be worth the watch.

The game will be live at 9 p.m. on the SEC Network.

Harrison is a sports coordinator at ESPN 98.1 FM/850 AM WRUF. He served as a beat writer for Florida Gators football for the 2019 and 2020 seasons. He also contributes to WRUF's Gainesville Sports Center segments and makes appearances on the Clash on Harp on Sports. Harrison has been a content writer for WRUF since January 2019 as well.
@HarrisonSmaj
Previous Lightning Defeat Kings In Shootout for 100th Point, Extend Streak
Next Missouri Searching for Hoops Win at Mississippi State