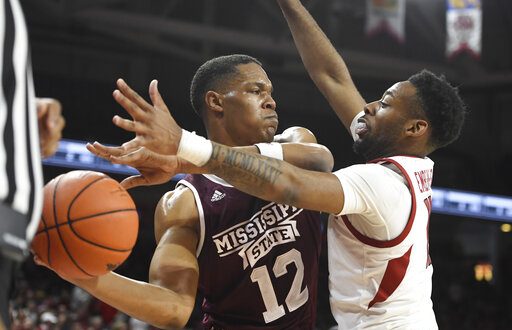 The Missouri Tigers are looking for a road win tonight as they travel to Humphrey Coliseum to take on the Mississippi State Bulldogs.  The Tiger men are currently 12-14 on the season while the Bulldogs are at 20-7. Tip-off is set for 7 p.m. tonight on the SEC Network.

The Tigers are looking to turn their luck around as they enter the game on a three-game losing streak. During their last game at Florida, they blew a double-digit lead and lost 64-60. Missouri is currently sitting in 12th place, where they will likely finish, in the Southeastern Conference.

Mississipi State is in a completely different place. The Bulldogs are coming into the game with a four-game winning streak, with their most recent win being a comeback win against South Carolina. Trailing by seven after the first half, Mississippi State was able to outscore South Carolina 47-25 in the second half to take the game 76-61. This game is crucial for the Bulldogs as they now sit tied for sixth in the SEC, just one game behind Ole Miss and South Carolina, who are currently tied for fourth.

The Tigers will really have to step up their offensive production in order to find a win tonight. Missouri averages just above 67 points per game, which is 11 points less than Mississippi State. Both teams are pretty even when it comes to made three-pointers, as both are averaging 8.4 per game. This is where Missouri will have to take advantage and score the majority of their points. Mississippi State is shooting for 47.4%, while the Tigers are at 42.9%

Jordan Geist and Jeremiah Tillman will be the keys to Missouri’s offense. During the team’s last win against Arkansas, Geist went for 18 points while Tillman went for 21 points. The Tigers are 10-3 on the season when Tillman scores in double digits. Mississippi State’s leading scorer, Quinndary Weatherspoon averages almost 19 points per game so Geist and Tillman will have to be on tonight.

Mississippi State is allowing its opponents to average 70.2 points per game while Missouri allows their opponents 68.6 points per game. The Tigers will have a slight edge defensively as they come into the game ranked 101st in the defensive standings, while the Bulldogs are ranked 149th.

However, the Tigers will have to guard the ball and finish at the rim. Mississippi State averages over five blocks per game and averages 8.4 steals per game. Missouri averages less than half of the Bulldogs averages in these categories.

When it comes to the SEC, the only player who averages more points per game than Quinndary Weatherspoon is Tennessee guard Grant Williams. Javon Pickett will have to be on defensively as Weatherspoon averages over 50% in field goal percentage.

The place where Weatherspoon will have to be cautious is ball control. He averages 2.6 turnovers per game. This is where Pickett, who has a team second-best 20 steals on the season, comes in. Pickett has been a starter in all 26 games this season, mainly for this defensive abilities. Pickett will have to be on defensively to stop the SEC’s second-leading scorer.

Previous Kentucky Hosts Arkansas in SEC Matchup
Next Despite 13 Triples as a Team, Florida Women’s Basketball Falls to Texas A&M 80-62