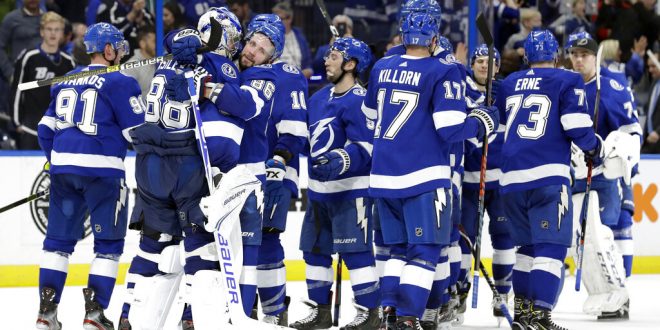 The Tampa Bay Lightning reached 100 points this season as they extended their winning streak to nine consecutive games by beating the Los Angeles Kings 4-3 in a shootout on Monday.

How Did It Happen?

Brayden Point gave the Lightning a 1-0 lead when he scored on the power play at 1:05 of the first period making it his 36th Tampa-Bay leading goal. Then, Anthony Cirelli made it 2-0 with a redirection of a shot by Braydon Coburn at 8:08 left in the first.

J.T Miller tied the game, 3-3 with 7:52 to go in the third after the Kings scored three straight goals in the period. He scored off a pass from Steven Stamkos.

Further, Andrei Vasilevskiy stopped 30 shots for the Lightning helping them improve the league’s best record to 48-11-4 while becoming the fourth team in NHL history to reach 100 points in 63 games or fewer.  However, Vasilevskiy did allow three goals in a six-minute span during the third period.

Vasilevskiy ranks third in the league with a .930 save percentage, as his 28-7-4 record sets him up for being a potential candidate for the Vezina Trophy.

The Lightning who are 11-0-2 in the past 13 games, lead the Boston Bruins by 19 points for first place in the Eastern Conference.

The Lightning remained quiet during this year’s trade deadline. For the Bolts, this became a reasonable outcome as they are leading in their conference.

"Ultimately, I just didn't find anything that I could say yeah that makes us a better team. That brings us closer to winning a Stanley Cup."

–@TBLightning GM Julien BriseBois discusses the decision not to make any moves before the #NHLTradeDeadline.#GoBolts #NHL pic.twitter.com/TmmNuEnm0e

Above all, with the deadline ending, the Lightning will now move their focus to the remainder of the season. After Monday’s match-up with the Kings, the Lightning now have 20 games to play as they look to decide which six defenders will get the minutes to play in the postseason.

The Tampa Bay Lightning will travel to Madison Square Garden to face off with the New York Rangers, Wednesday night at 7:30 p.m.