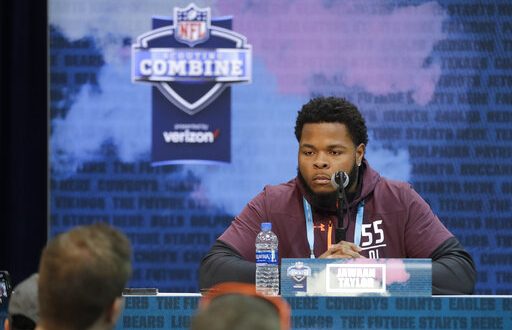 Going Into Day 4 Of The NFL Combine

The NFL Scouting Combine is heading into day four and starting fieldwork. The combine is in Indianapolis and Gators have eight players there to put in work. On Friday, the running backs, offensive linemen and special teams are doing fieldwork, while some other groups are getting measurements done.

K-State’s, Alex Barnes, impressed everyone Thursday when he broke the bench press record for true RB’s with 34 reps. It was previously held by Jerick McKinnon (Georgia Southern) with 32 reps.

Gators at the Combine

Field workouts start today at the combine and four Gators will be participating. These players include Martez Ivey, Fred Johnson, Jawaan Taylor, and Jordan Scarlett.

One of the Gators getting a lot of hype is OT Jawaan Taylor, who is reported to be one of the top tackles going into the draft. While meeting with the press, he expressed that he would play wherever a team needs him.

Also Friday, Vosean Joseph, Cece Jefferson, and Jachai Polite will be getting their measurements done. Chauncey Gardner-Johnson III will also be arriving.

Here’s the schedule for the rest of the week: