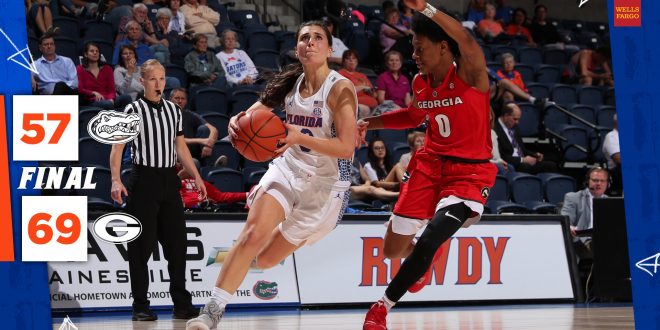 The Florida women’s basketball team could not win its final regular season game at home, losing to the Georgia Bulldogs 69-57 on Thursday night.

1st half for the Gators

The Gators started this game off with some great energy. It was an important night for the Gators as they celebrated Senior Night and fought for a win against Georgia.  Florida’s only senior, Funda Nakkaosglu, has played a massive role for the Gators over her career and it was her last performance in the O’Dome.

Returning to the line up after missing the Gators previous match up was Delicia Washington who added four points and seven rebounds in her return. She led the Gators in rebounding for the night.

Zara Williams also got it going early for the Gators by scoring the first eight points of the game as they trailed behind Georgia. She scored 12 of her 25 points for the Gators in the first half.

As for Funda Nakkoasglu’s last game as a Florida Gator, there was no doubt that she left her passion on the floor. After getting off to a slow start and gaining only five points in the first half, she turned it up in the second half and scored 14 points.

Coming into this game Nakkoasglu was on the verge of scoring 2,000 career points. She continues to look  at setting this record for her college career by only needing seven more points after the Georgia game; her 14 point performance is her 22nd time in double-figures this season.

Nakkoasglu had this to say about her Gator career.

At the end of the first half the Gators trailed the Bulldogs 36-25 although they outscored Georgia 14-10 in the paint during this half.  The Gators tried to cut into the Georgia lead late in the game but could not quite make it happen and now Florida will end its regular season this weekend.

That last regular season game will be at Vanderbilt Sunday before getting ready to play in the SEC Tournament.

Previous Gators Women’s Basketball: Senior Night Soured with Loss to Georgia
Next Going Into Day 4 Of The NFL Combine 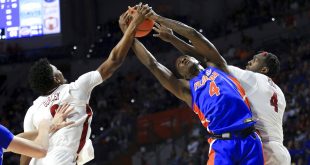