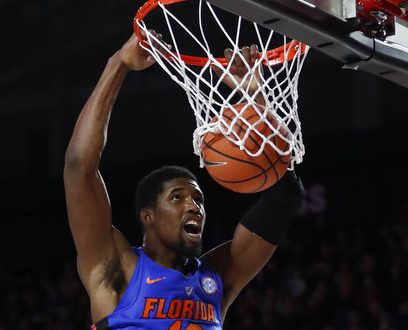 Coming off of five straight wins, the Gators’ men’s basketball team will try to complete the regular season sweep of the Georgia Bulldogs on Saturday.

What to Expect from Georgia

The Bulldogs are 10-18 on the season and have a 1-14 record in SEC play. In KenPom.com’s statistical rankings, they are 81st in the country in adjusted offensive efficiency. They are averaging 73.8 points per game while shooting 33.5% from three. They are averaging over 14 assists per game, but they counteract those assists with a whopping 16 turnovers per game.

The defensive end has been more of a challenge for Tom Crean’s group. Georgia is 150th in adjusted defensive efficiency. They are allowing 75.3 points per game. The Bulldogs are led in scoring by the sophomore duo of Nicolas Claxton and Rayshaun Hammonds. Claxton is averaging 12.8 points, 8.8 rebounds, and 2.4 blocks per game. Hammonds is putting up 12.6 points and 6.3 rebounds per game.

Georgia soph Nicolas Claxton is undoubtedly one of this season’s most improved players – he is one of just four D1 players currently leading their team in ppg, rpg, apg, spg, and bpg.

Just finished up LSU @ UGA. Here’s what stood out on film: pic.twitter.com/Q2QPgyBvuj

UGA has had a rough stretch as of late. They have lost nine games in a row. However, their last four losses have been by a combined nine points. Florida coach Mike White spoke about their streak of tough of losses.

Building Off the Last Meeting

The last time these two teams met, the Gators went to Athens and took home a 62-52. Florida put on a fantastic defensive performance, shutting down the Georgia offense. The Gators forced 20 turnovers in the win and held the Bulldogs to 39.5% shooting and just five made threes. With Georgia being prone to mistakes on offense, the turnover differential will be a very important stat in this game. If the Gators can take care of the ball and force the Bulldogs into mistakes, then Florida will have a very good chance of picking up a win on Saturday.

On the offensive side, KeVaughn Allen scored 13 points and Noah Locke added 10. They were the only two Gators to score in double figures. Florida will strive for a better performance this time around on the offensive end. With the offense trending in the right direction and the Gators having the home court advantage, the team should look more comfortable in this matchup.

Gators Have the Momentum

The Gators have won five straight games to vault themselves to a 17-11 overall record and a 9-6 record in conference play. They are in a four-way tie for fourth place in the SEC standings. The team is playing very well, and individual players have really stepped up as of late.

In this hot stretch, different guys have stepped up in different games. If one guy is having a cold night, another player is ready to step up. For example, KeVaughn Allen and Noah Locke combined for just 11 points on 4-15 shooting against Vanderbilt, but Kevarrius Hayes, Andrew Nembhard, and Jalen Hudson carried the team to victory. Hayes had 14 points on 5-5 shooting. Nembhard finished with 19 points on 7-8 shooting, and Hudson scored a season-high 17 points in the win.

During the winning streak, opponents are only scoring an average of 60.4 points per game against the Gators. The offense has improved, and the defense has maintained itself as one of the best in the country.

Florida and Georgia will be battling it out at Exactech Arena on Saturday night at 8:30 p.m.