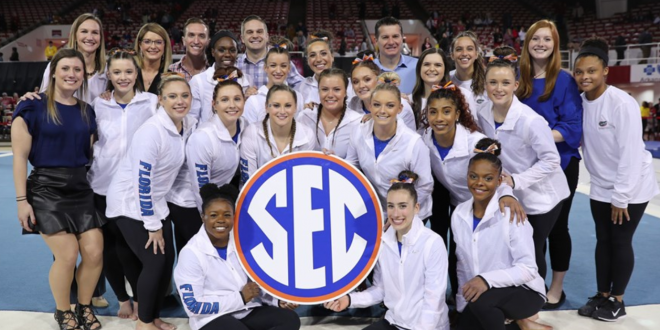 A Friday night takedown in Fayetteville crowned Florida as the Southeastern Conference regular season champions in the sport of gymnastics.

How the Gators got it done

Florida stole a struggling Arkansas’s final opportunity to claim an SEC victory in the regular season. The visiting team was simply too much, and held on strong to its lead in every rotation.

Alicia Boren dazzled in nearly every rotation, earning top scores in every event besides bars. She took home her second all-around title of the season with a total of 39.625, with freshman Trinity Thomas coming up right behind her with a 39.55.

Florida wiped the floor in beam, bars and floor, but came up short on vault. Vault was once again the looming Achilles’ heel.

A 9.925 from Boren would mark the evening’s best, but she would be the only Florida gymnast to score above a 9.9 on the event. Freshman Nya Reed supplied a 9.825, followed by a 9.8 from Thomas.

Thomas earned the bars title with an evening-best 9.925. Freshman Savannah Schoenherr rallied behind her with a 9.9, a score that continued to solidify her placement in the bars lineup.

Floor, a typical showstopper became a four-way tie for the title. Four gymnasts would score a 9.925: Florida’s Boren and Thomas, and Arkansas’ Sydney McGlone and Sophia Carter. But Reed’s 9.9 was enough to put Florida on top. Arkansas wasn’t able to pull together another score above a 9.9.

Florida will return home on March 8 in its final meet of the regular season to host Penn State.

Previous A Look into Florida Gator Baseball’s Opposition, the Winthrop Eagles
Next Gators Look to Stay Hot Against Bulldogs