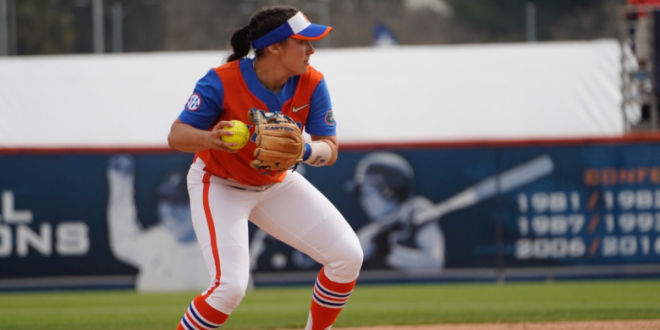 The nationally-ranked Florida softball team took on a pair of top five teams on their second day in the Judi Garman Classic in Fullerton, California.  Florida dropped a rematch with number two UCLA but came back later in the night to best the fifth-ranked Washington Huskies 1-0.

UF is now 4-2 against Top 25 teams this season and its win over the Huskies is the first win over a Top five opponent this season.

Tim Walton’s squad scored only one run the whole day. Bruins ace Rachel Garcia blanked the Gators in a 4-0 loss. Meanwhile, they pushed across their lone run of the day on a walk by Huskies pitcher Taran Alvelo for a 1-0 victory.

Florida struck out a combined 25 times and recorded six total hits between the two games on Friday. Ten strikeouts came against Garcia and 15 were recorded by Alvelo.

Sophia Reynoso and Kendyl Lindaman tied for the most hits on the day with two apiece. Both players finished the day 2-for-6 at the plate.

The Gators have scored less than three runs in a game during the whole tournament. But, the reason for Florida’s lack of offense on Friday could be they faced the best of the best on their opponents’ respective pitching staffs.

Garcia is 7-0 and leads UCLA with 78 strikeouts through 46.1 innings while Alvelo has 74 punch outs through over 60 innings.

After tying a career-high in strikeouts with 13 against New Mexico, Natalie Lugo was back in the circle to face UCLA. She cruised through four innings but couldn’t record an out in the fifth and gave up four runs.

She was relieved by Katie Chronister who pitched three perfect innings.

After arguably her worst statistical performance against UCLA on Wednesday, Kelly Barnhill came back Thursday and picked up two wins. She trotted back out to the circle on Friday and showed for her team.

Barnhill pitched eight innings in the pitcher’s duel against the Huskies. She posted 10 strikeouts in her one-hit shutout of Washington.

Florida’s Saturday matchup with CSUN was canceled due to rain. Florida will head back to Gainesville and have the week to prepare for the seventh-ranked Tennessee Volunteers coming into town for the start of conference play.