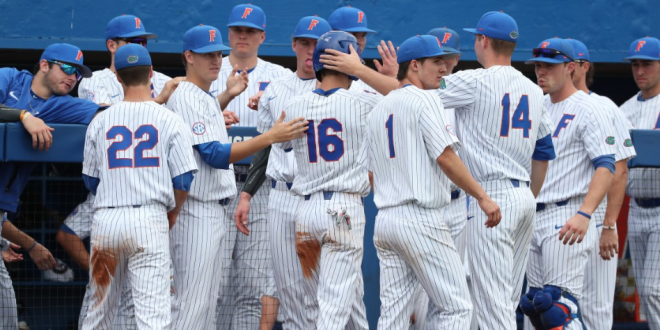 A 23-point victory might be common in basketball, or even a game of football, but not so much in a collegiate baseball game.

A 23-run victory is exactly what Florida’s baseball team (9-4) delivered in Game 2 of the series against the Winthrop Eagles on Sunday.

The Gators would rout the Eagles 28-5 in Game 1 of Sunday’s doubleheader. Game 2 finished 5-3, as the teams played only seven innings after Saturday’s game was postponed. Kevin O’Sullivan’s team will now prepare for a two-game series against Florida Gulf Coast on Tuesday and Wednesday.

Leftwich goes six strong and Crisp closes it out for his sixth save.#Gators take both games of the doubleheader and all three on the weekend. pic.twitter.com/Sim6OO4cIo

Gator offense scores most runs since 2003 in Game 2

Twenty-eight runs on 23 hits. Three grand slams in one game. The numbers jump off the box score for themselves.

After posting 16 runs in Game 1 of the series, Florida’s offense proved that they still had plenty left in the tank for the rest of the series. At one point, the Gators were leading only 3-2 in the fourth inning of Sunday’s opener.

But the offensive juggernaut that happened after that made the scoreline nothing but lopsided. Florida scored eight runs in the fourth, six in the fifth and another 11 in the seventh.

The @GatorsBB squad hit 3 Grand Slams in one game today…

Is that good?
Asking for a friend. pic.twitter.com/KTsTg4aw9B

In similar fashion to Sunday’s opener, Florida hit Winthrop with an offensive sucker punch that they’d never recover from in Game 3 of the series.

Florida posted four runs in the second inning to jump out to a 4-0 lead off Eagles’ starter Nate Pawelczyk. The Eagles only had until the seventh inning of this one to come from behind. The latter game was abbreviated due to Saturday’s postponement.

While Game 1 and Game 2 of this series were both blowouts, the series finale was anything but. Despite the Gators’ big frame, the Eagles managed to score a pair of runs off sophomore starter Jack Leftwich (3-0).

Regardless, Leftwich, like Tommy Mace (3-0) did before him in Game 1, pitched well with a lead. They each only walked one batter, and both exited their starts with less than 80 pitches thrown. A well-rested tandem of Leftwich and Mace may bode well for the Gators upcoming games.

O’Sullivan talked about both his sophomore starters after the game.

“I thought both of our starters did really good today. We probably threw more right-on-right change ups than we have in a long, long time. Winthrop’s hitters were really aggressive and they were on time for fastballs, that was really the only way to slow them down a little bit. It was a good weekend for us.”

Florida continues its 14-game home stand on Tuesday and Wednesday at 6 p.m at McKethan Stadium.