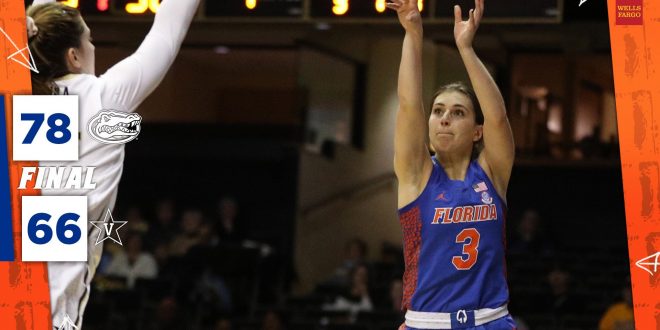 The Florida women’s basketball team ends its regular season on a high note, winning at Vanderbilt 78-66 on Sunday.

Gators Successful Win on the Road

Senior Funda Nakkasoglu, led the Gators to an impressive win by scoring 22 points, giving her over 2,000 points in her Gator career.  And, she became one of 2o active players to score 2,000 points in her college career.  She really lit it up in the third quarter where she scored 18 points, the most any Gator has scored in a single quarter.

Following behind the senior guard was Delicia Washington who had very impressive game coming off the bench scoring 20 points while grabbing 11 rebounds, making that her fifth double-double of the season. Kiara Smith also contributed into the Gator success, scoring 10 points, with eight assists and five rebounds; her performance made this the eighth time this season she landed herself in double figures.

The Gators came out the gate with a shooting mentality, and it paid off as they shot 49.2 percent from the field, one of their best marks of the year.  This win for the Gators marks their first win on the road since January 18th of last season when they defeated Arkansas.

Vanderbilt ended its regular season 2-14 SEC and 7-22 overall. Leading Vanderbilt was sophomore guard Chelsie Hall who tallied 20 points, shooting 8 of 14 from the field. Following right behind her was Brine Alexander, who scored 12 points and grabbed five rebounds, but it was not enough to stop the Gators on this day.

Final from Nashville. Thank you to all of our fans who supported us in Memorial Gymnasium this season. pic.twitter.com/2XJkv5dNcQ

The Gators will head to South Carolina to play in the SEC Tournament on Wednesday afternoon; the Gators enter as the 13 seed where they will face off against Ole Miss.