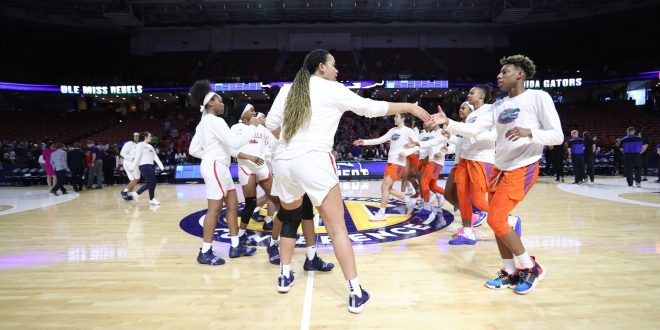 The season has been a rough one for Florida women’s basketball but the team is trying to finish it the right way.  Coming off an impressive road win to Vanderbilt in its last regular season game, the Gators used that momentum to beat Ole Miss.

The Gators entered the tournament as the 13 seed while Ole Miss was the 12 seed.  Ole Miss defeated the Gators earlier in the season on their home court 76-66.

Today, the Gators came out of the gates motivated and determined to get the win. Delicia Washington, who came off the bench for the Gators, scored 17 points and grabbed eight rebounds.

Following alongside her was senior guard Funda Nakksoglu who also scored 17 points. This double-figure game for the senior is her 24th this season. Nakkasoglu started off the game slow in the first half, but she and Washington combined to score 30 of their 34 points in the second half.

All eight players that played on this Gator team contributed in their first-round win.  This was an impressive win for the Gators knowing that only two players on this roster have had previous SEC tournament experience.

The Gators fight to see another day in Greenville, South Carolina where they will take on the fifth seeded Missouri Tigers this afternoon.  The Gators defeated the Tigers in Gainesville earlier this season in the final seconds of the contest.