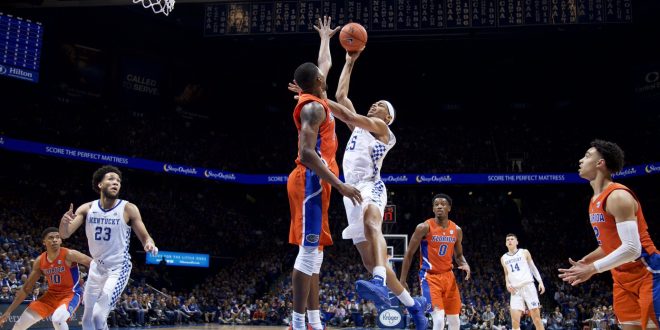 Florida Basketball Falls to Kentucky on the Road

The Gators’ men’s basketball team finished the regular season with a road loss to the Kentucky Wildcats on Saturday by a score of 66-57.

With 5:52 left in the first half, Ashton Hagans made a three pointer to put the Wildcats up 25-16. The momentum seemed to be solely in Kentucky’s favor. However, Florida flipped a switch and went on a 15-5 run to close out the first half. The Wildcats didn’t hit a single field goal during that run. Jalen Hudson, Mike Okauru and Isaiah Stokes made some big shots to close the gap and maintain the lead.

A few minutes into the second half, Kentucky starting feeding off of their home crowd and pulled away. The Wildcats used a 15-2 run over a seven minute stretch in the second half to take a double-digit lead. Tyler Herro continued his second half heroics with a 12 point second half. PJ Washington turned a subpar first half into a 15 point and 9 rebound performance.

Most of Florida’s leading scorers had very poor performances on Saturday. KeVaughn Allen, the team’s leading scorer, had just 3 points on 1-6 shooting. Prior to Florida’s win against Vanderbilt on February 27th, Allen had only been held to single-digit scoring games five times this season. He has now scored under 10 points in four straight games.

Noah Locke had a quiet outing, scoring 5 points on just 4 shot attempts. Jalen Hudson was aggressive on the offensive end with 13 points, but he took 16 shots to get there. Andrew Nembhard finished the game with 8 assists, but he went 1-8 from the field.

With so many players struggling to create for themselves on the offensive end, the team failed to keep the game close when Kentucky made their run.

On the Bright Side

Despite the loss, the Gators can take several positives away from the game. Kevarrius Hayes had a great day with 19 points on 8-9 shooting along with 5 rebounds, 2 assists, and 2 blocks. Hayes is averaging over 11 points per game over his last six outings.

The Florida defense proved itself to be effective once again. Kentucky was held to 66 points on 41.3% shooting. The Wildcats hit just 2 three pointers the entire game and committed 11 turnovers.

Isaiah Stokes continued to show that he can give the Gators a boost off the bench. He scored 6 points in 13 minutes, and was a huge part of Florida’s halftime lead.

Regular season finale in Kentucky today. On to Nashville and the @SEC tourney.#GoGators pic.twitter.com/JGI3ObOvKO

The Gators closed the regular season with a 17-14 overall record and a 9-9 record in SEC play. The team will now turn their attention to the SEC tournament, which begins on March 13th. With just a 9-9 record, the Gators will likely be the 8th seed in the tournament. The 8th spot will set them up for a rematch with the Alabama Crimson Tide, who the Gators defeated earlier this season.