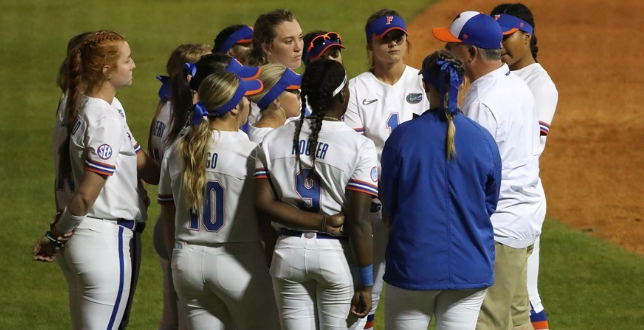 Through the first three innings of the contest, Gator starter Kelly Barnhill looked as locked-in as ever. She recorded seven of her eight strikeouts within those frames and allowed only two baserunners.

But, it was in the fourth when the wheels fell off for Florida. A leadoff home run by Kaili Phillips tied the game up at one run. After retiring the next batter, Barnhill allowed a single to Haley Bearden.

Ally Shipman took the first pitch she saw and launched it into left-center field to give Tennessee a 3-1. Freshman Gracie Osborn singled in the following at-bat. Another first-pitch dinger, this time by Cailin Hannon, made it 5-1.

Barnhill would recover to get the next two batters to end the inning and her night in the circle.

Freshman Danni Farley would take her place in the fifth for her first innings of SEC action ever. She didn’t fare too well either.

Her first three batters: single, two-run home run (Phillips’s second) and a hit-by-pitch. A few batters later, Farley was one pitch away from escaping any further damage.

Instead, Hannon pulled a ball through the right side to collect her third and fourth RBIs of the night. The lead reached its peak at 9-1.

Florida couldn’t muster up any offense in the bottom of the fifth to keep the game going as they dropped their first regular season game in the new KSP.

Despite being one of the best slugging teams in the country (.558), Tennessee came into this matchup ranked 10th among SEC teams in home runs hit with 19.

Barnhill only allowed three home runs in 16 appearances prior to Friday. But, Florida was statistically among the SEC’s worst in home runs allowed now with 9. That number is now up to 13 and puts the Gators next-to-last.

Who is the worst in the SEC at giving up the longball? Tennessee with 16. Although with Florida only registering two hits, Vols pitching has only allowed 75 total hits all season.