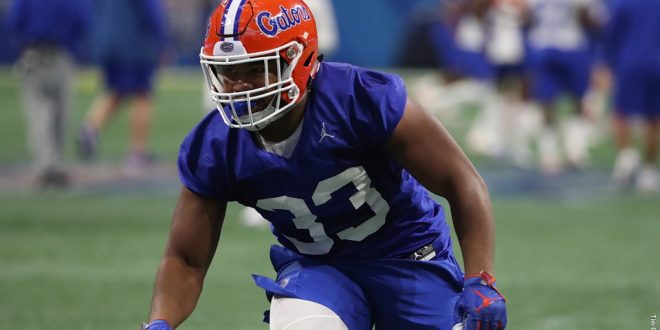 Florida football is creeping around the corner with spring practice beginning today. The Gators take a look at the incoming and returning linebacker positions.

Coach Dan Mullen looks to prepare another great year for the Gators football team, not only all around the field but especially at the linebacker position.

A key player, Vosean Joseph, who was a very important piece to Gators defense declared for the NFL draft following the 2018 season. Joseph was the leading tackler for the Gators with 93 tackles on the season.

With this missing piece, Dan Mullen expects others to step up and get the job done. There are still some very talented linebackers with a shot to make a difference.

Returning Players for the Gators

As spring training begins, the Gators have their eye on David Reese II to step up as one of their main linebackers. Reese has been suffering from different injuries at the beginning of the last two seasons. Despite being forced to miss the first three games of the 2018 season, he still managed to end the season with 77 tackles which landed him as the second highest tackler on the team.

He followed right behind his teammate, Vosean Joseph, which makes the future look bright in the linebacker position.

There are also other key linebackers returning to the Gators defense that have the potential to make a difference.

James Houston IV – Houston finished the season with 28 tackles. He also forced two fumbles and blocked a punt during his debut season after missing the 2017 season.

Rayshad Jackson – A redshirt Senior returning to this Gator team. He played in 13 games in 2018 recording 36 tackles.

Jeremiah Moon–  This redshirt Junior played in all 13 games this season for the Gators. He totaled 31 tackles, 1.5 sacks, and one fumble recovery in his second full season.

With those four keys players making big tackles and helping the Gators in important moments, there are also some linebacker reserves that show promise in their future.

Despite only having 15 tackles in his first full season as a Gator, Ventell Miller had two tackles for loss, one sack, and one interception. His interception that came against Idaho was the ninth-longest in school history totaling 82 yards.

Lacedrick Brunson also showed moments of future potential as a reserve for his limited time on the field. He recorded one tackle in this college debut and continued on for seven tackles for the season.

Coming into the 2019 football season, the Gators are returning some talented players in the linebacker position, which will be much needed to follow the success of last years team.