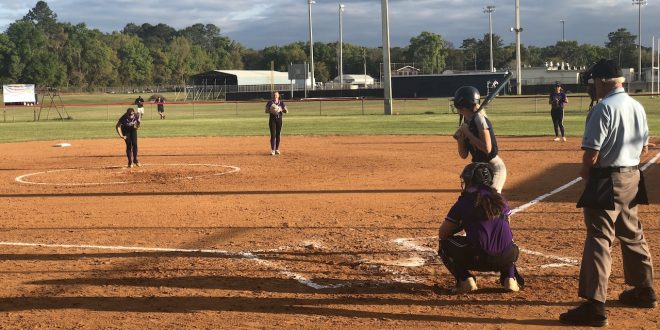 In the third inning, Gainesville’s Ashton Palmer bunted a single after a pop out and proceeded to steal second and third base on the following pitches. A single to left brought Palmer home and increased the Gainesville lead to 3-0. With two outs in the inning, the Hurricanes rallied to bring in two more runs following a pair of singles and a double.  Humphrey pitched a scoreless third inning to maintain the lead.

“I knew if I threw a lot of strikes then we would’ve come out on top,” Humphrey said after the game. The third inning was the last Humphrey would go on to pitch as she was pulled before she could throw again in the fourth.

With a 5-0 lead at the top of the fourth, Gainesville had two runners on base when Humphrey took her turn at bat. On top of pitching a no-hitter thus far, Humphrey also contributed with her bat by clearing the bases with a double. A pitch later, Briana Boggs hit Humphrey home to extend the Hurricanes’ lead to 8-0. It was after this lead extension that Humphrey was replaced in the circle by Summer Palmer in the bottom of the fourth inning. A pair of singles and a double for Vanguard led to the Knights’ first run of the game. Another single by Regan White led to another run for Vanguard to end the fourth inning 8-2.

Later, four straight Hurricane errors resulted in a run scored and the bases were loaded for the Knights, but they could only manage to score that one run.

Up 8-3 going into the final inning, the Hurricanes had three batters come up and three batters go down. Facing a five-run deficit in front of their home crowd, Vanguard could not complete the comeback as Gainesville walked away with their sixth victory of the season.

After the game, Gainesville coach Chris Chronister applauded Humphrey for another stellar performance.

“She pretty much dominated in the circle like she normally does. She was doing a great job pitching,” Chronister said. “She just has a great mindset in the circle. Nothing really seems to phase her.”

While Chronister also acknowledged the win, he did say that are still areas to improve for the Hurricanes, namely on the defensive side.

“Well, defensively we need to tighten up a little bit because at the end of that game we had a bunch of errors, which is very uncharacteristic because we typically don’t have those type of errors.”

Gainesville’s next game is against the Bishop Verot High Vikings, a private school in Fort Myers, Florida, on Saturday.