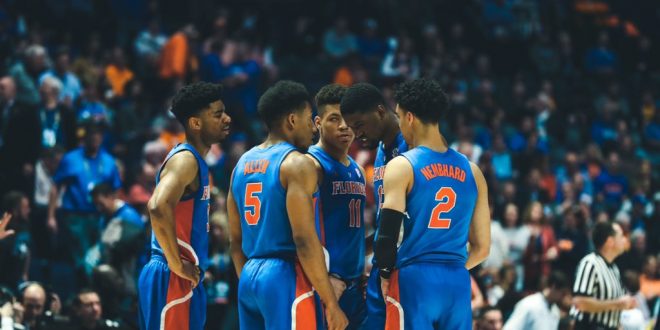 The Auburn Tigers defeated the Florida Gators 65-62 in the semifinals of the SEC Tournament.

Andrew Nembhard attempted a three pointer when Gators were down by 3 with approximately 5 seconds left. It appeared like he got hit by multiple defenders, but the referees didn’t make the call, ultimately sending Auburn to the SEC Tournament finals.

Jared Harper led the Tigers with 20 points on 7-11 shooting, including 5-7 from beyond the arc. After a sluggish start, Bryce Brown added 11 points in the second half.

Kevarrius Hayes paced the Gators with 16 points and 12 rebounds. This was his first career double-double. Jalen Hudson added 16 points, 4 rebounds and 4 assists.

The Gators got off to a hot start as they jumped out to a 19-10 lead halfway through the first half. The Tigers proceeded to hit 3 straight threes to tie the game at 19. After that, the game stayed within two possessions until the Tigers went up by 8 points with 6 minutes left in regulation. The Gators had an opportunity to tie the game up with 5 seconds left, but couldn’t capitalize.

Mike White was able to control the pace of the game by keeping the score in the 60’s, but Auburn took advantage of their additional opportunities.

On top of controlling the turnover battle, the Tigers also connected on 13 three pointers in 29 attempts.

The Gators did out-rebound the Tigers 32-17, but only grabbed 5 offensive rebounds.

Andrew Nembhard and Keyontae Johnson, who had been dominant in their past two victories, only combined for 9 points on 4-11 shooting. Nembhard, who plays with such a calming presence, struggled to handle the pressure of the Tigers. The freshman had 4 turnovers on the afternoon.

The Gators have been on the NCAA Tournament bubble for a majority of the season. With the victory over LSU on Friday afternoon, the Gators are expected to make the NCAA Tournament. They will officially find out their fate on Sunday night. For Auburn, they play the winner of the Kentucky Wildcats and Tennessee Volunteers on Sunday afternoon at 1:00 p.m. The game is set to be aired on ESPN.

SEC Tournament for Florida ends with controversial 65-62 loss to Auburn. At 19-15 with strong SOS, I'm expecting Florida will end up a 10 seed #Gators