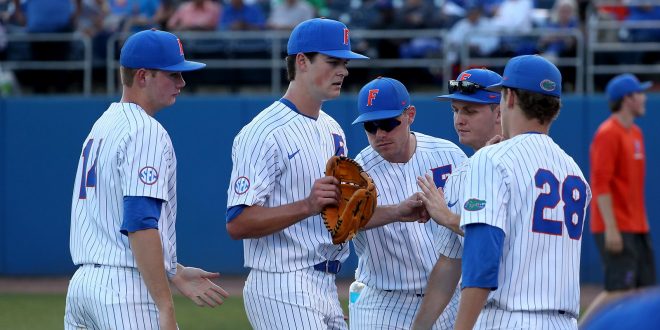 Pitchers Duel On The Mound

Advertised as a pitcher’s duel entering the series, Florida pitcher Tommy Mace and the Bulldogs’ Ethan Small lived up to the billing, each working through three scoreless innings.

Then, in the bottom of the fourth, Florida’s Will Dalton sent one over the bleachers off a 3-1 fastball from Ethan Small to give the Gators a 1-0 lead.

Wil Dalton feasts on this 3-1 fastball and sends it over the bleachers in left for a 1-0 #Gators lead. #DaltonDinger

The Bulldogs would tie the game in the fifth at 1-1 on a line drive home run from Justin Foscue.

After that, Mississippi State would take the lead in the sixth on a wild pitch thrown by Mace and in the seventh, the Bulldogs increased their lead to 3-1 on an RBI hit by Jake Mangum.  Florida pitcher Hunter Ruth entered the game to replace Mace as he escaped further damage thanks to a diving catch on a line drive by Gator first baseman Kendrick Calilao.

MSU gets a RBI single from Mangum, but a diving catch by Calilao ends the threat.

In the eighth, Mississippi State added another run off an RBI single from Josh Hatcher before Florida responded back with a rally.  An RBI single from Nelson Maldonado cut the Gator deficit to 4-2 but the Bulldogs would extend their lead in the top of the ninth with two runs off reliever Ben Specht as Elijah McNamee doubled home both runs.

RBI single from Nelly and the tying run comes to the plate as Calilao steps in!

in the Gator ninth, a lead-off walk by Wil Dalton and a hit by pitch gave Florida two runners and Austin Langworthy followed with a single to score Dalton.

After that, pinch-hitter Blake Reese’s RBI single helped make it a two-run game. Then, pinch hitter Kirby McMullen’s sacrifice fly cut the lead to one, but Brady McConnell’s strikeout ended the game and his 15-game hitting streak.

McConnell struck out to end the #Gators rally, but it was a valiant effort in the ninth.

Although the Gators fell short, sophomore pitcher Tommy Mace pitched efficiently throughout the night as he allowed just one base runner through the first four innings via a walk, before the Bulldogs’ solo home run. He pitched 6.1 innings on 85 pitches on the night.

Florida head coach Kevin O’Sullivan spoke after the game about Mace’s performance on the mound.

“Other than the lead off walk one inning and the hit by pitch, I thought he was really sharp,” O’Sullivan said. “I thought Tommy gave a great effort and was very sharp.”

Florida and Mississippi State continue their series on Saturday at 2 p.m. You can catch the game live on the Gators Sports Network (98.1 FM/ 850 AM).