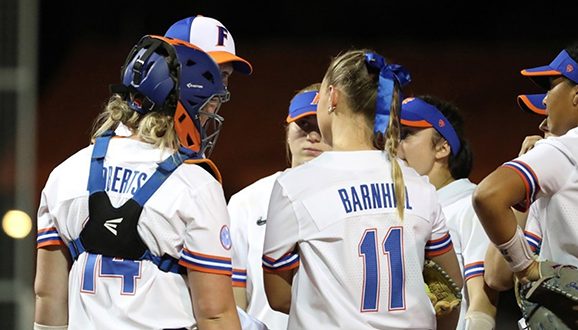 Florida softball’s conference woes continued this weekend in Oxford, Mississippi. The Gators found themselves on the losing end of a conference game for the sixth time this season after falling 3-1 to the Ole Miss Rebels in the series finale on Sunday.

Additionally, it’s the third consecutive SEC series loss for the sixth-ranked Gators. It marks the first time UF has dropped three conference series in a season since 2014. The team is now 29-8 overall and 3-6 in the SEC.

Despite the two-run difference, Florida hit better than Ole Miss in the game. The Gators hit .250 as a team while Kelly Barnhill limited Ole Miss to .182.

The lone run of the game for Florida came off the bat of Hannah Adams. She singled through the left side to bring home Hannah Sipos from third base.

Numbers Against the Conference

Florida is one of, if not, the worst team at the plate against Southeastern Conference teams. It ranks inside the bottom three against conference opponents in these major categories:

The Gators are in the middle of the pack or near the top in the circle. They are among the league leaders in strikeouts, batting average against and walks allowed. But, Florida pitchers hold a 4.03 earned run average in-conference. They even average at least one home run allowed each game.

Those numbers aren’t bad enough to lose ball games unless your offense isn’t putting up runs.

Outfielder Jade Caraway hasn’t been slumping though. Sunday was her eighth straight game with a hit. She has 12 base knocks over this streak.

The tough match ups don’t stop as Florida will host the third-ranked Florida State Seminoles on Wednesday at 7 p.m. That game can be seen on ESPN 2.