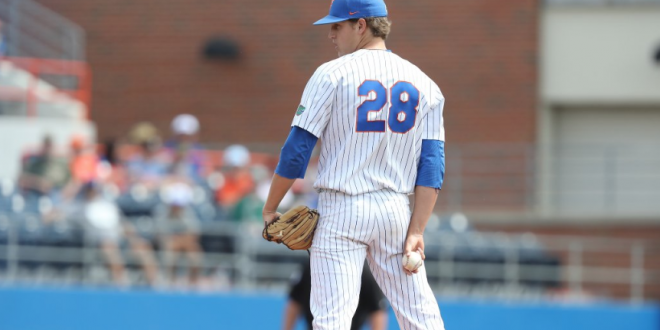 This weekend was an important SEC series for Florida’s baseball team (20-10). Having opened the season 1-5 in conference play, Florida coach Kevin O’Sullivan said Sunday he recognized the significance of these three games against Alabama.

The Gators completed their sweep of the Crimson Tide (20-9; 2-7) by defeating the visitors 6-3 at McKethan Stadium. It was their fourth consecutive win and their first SEC series win this season.

Saturday the Gators eased to a 12-3 victory over Alabama, but Sunday’s game was much more unconventional. Neither team’s starter lasted past the second inning.

Florida’s pitcher Jack Leftwich was withdrawn after just 1+ innings of work due to a nagging blister. From there, freshman pitcher Hunter Ruth (1-0) was exceptional in relief. He pieced together the win for his team collecting his first as a Gator in the process.

Florida is now within one win of a .500 record in SEC play. They’ll get the opportunity to even their conference record next weekend at Ole Miss (20-9; 5-4). First, Florida A&M visits Gainesville in the midweek as they’ll play the Gators at 6 p.m. ET on Tuesday.

After Sunday’s win, Ruth admitted that he was always prepared to enter Sunday’s game prematurely. Leftwich has been dealing with a lingering blister issue for roughly five weeks now. The blister opened up once again in the first inning of his start.

While Ruth said he was surprised to enter the game in just the second inning, he was nothing short of brilliant against the Crimson Tide. The freshman threw 7.2 innings of one-run ball to go along with five strikeouts. He held Alabama scoreless from the third inning until the last frame of the game.

In the ninth, with the game already 6-1, O’Sullivan lifted Ruth for sophomore Jordan Butler after a two-out walk. Ruth exited to the sound of a deserved standing ovation from the home crowd.

He spoke about his thought process on the mound after the win.

Butler gave up a two run homer to freshman pinch hitter T.J. Reeves.  It cut Florida’s lead to three, but Butler silenced any hopes of a comeback two pitches later. The lefty induced a weak roller to second base off the bat of senior Joe Breaux to end the game and close the series.

After allowing four runs in an inning of work last weekend against Vanderbilt, this time Ruth was a bright spot out of the Gator bullpen in Sunday’s finale.

In the series finale, Langworthy tied the game at 1-1 with an RBI double in the bottom of the second inning. In the fourth he took reliever Jeremy Randolph deep to right field on a 2-1 fastball for a two-run homer; his fourth long ball of the season extended Florida’s lead to 4-1.

The Gators would tack on two more insurance runs in the bottom of the eighth. Freshman Kendrick Calilao singled to drive in McConnell after the shortstop singled and swiped second base. Two base hits later and Calilao would score on a wild pitch to make the score 6-1.

Leftwich’s issues with blisters aren’t beneficial to Florida’s weekend rotation. O’Sullivan said that “Jack hasn’t been able to get into a groove this season because of the injury” after the game.

Still, Ruth’s superb relief appearance could signal added depth to the back end of Florida’s bullpen. O’Sullivan also alluded to Ruth, freshman Nolan Crisp and freshman Christian Scott after Sunday’s game in the hopes that they will provide some answers for his team late in games.

On the other hand, Florida’s offense has begun to perform somewhat as expected. Younger players such as utility Jacob Young and Calilao are still providing sparks, but so are the likes of the more experienced bats like Langworthy.

Alabama travels back to Tuscaloosa for a game against Troy on Tuesday. They’ll play their SEC series next weekend at home against South Carolina (17-11; 2-7).

Headed back to Tuscaloosa to start the new week