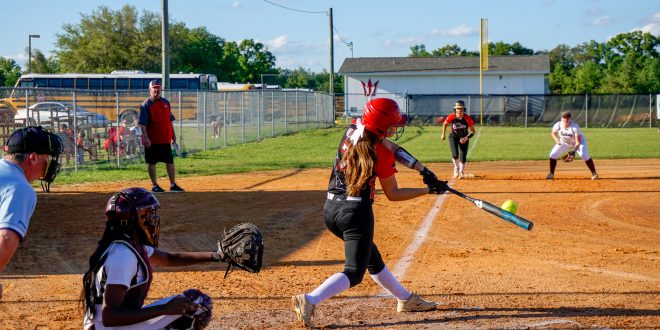 #7 Raegan Geiger hits an RBI for the Lady Red Devils en route to the 18-5 win.

Statistical leaders include Williston’s Karley Jerrells, who had four strikeouts while Taylor Gettman and Miranda Geiger hit home runs which added to the onslaught of runs scored in this game.

For the Red Devils, Miranda Geiger had four RBIs, Maci Vonderstrasse had three RBIs, and Karley Jerrels had two RBIs. For the Raiders, Gissell Servin led the team with three RBIs.

An astounding 10 RBIs propel @DevilSoftball to a 11-1 lead at the end of the second inning. @ESPNGainesville. pic.twitter.com/kG2xFtGACs

The Red Devils came out in the bottom of the second swinging for the fences. Williston went through their entire batting order and then some, totaling 14 at-bats for the inning.

During their streak of success, the Lady Red Devils had 10 hits, including a home run and multiple doubles to light up the scoreboard. Williston earned an RBI on each hit in this inning while many players were walked, placing them in a great position to score.

On the other side of Williston’s hitting success was the pitching struggles from Crescent City.

Off of the mark

The Lady Raiders totaled only one strikeout for the entire game, relying on force-outs and pop-fly outs to consistently end innings. Crescent City pitchers combined to walk six in five innings.

Crescent City pitchers also combined to allow 16 hits over the course of the entire game, including a three run hit from Maci Vonderstrasse when the bases were loaded in the bottom of the second inning.

Williston was not without its pitching woes as well, as their pitchers combined to allow eight hits, but offensive damage was limited.  In the game, the Red Devils also stole nine bases to help the offensive attack.

Williston will play at Bradford High School on April 4.

Crescent City will play at St. Augustine on April 4.

Steven Walker is a beat writer for ESPN Gainesville and is currently studying Journalism & Sports Media at the University of Florida.
@swalker_7
Previous Williston Baseball Cruises Past Crescent City
Next Lightning beaten 4-2 by Canadiens with two games remaining until playoffs