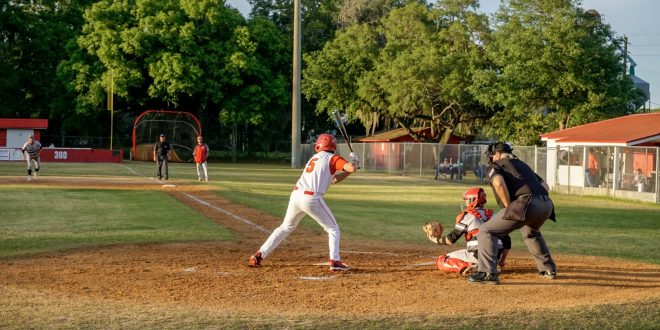 The Williston baseball team got a much-needed home victory against Crescent City, mercy ruling the Raiders, 12-2, after scoring eight runs in the fifth inning.

The Red Devils had already clinched the number one spot in 1A District 6 tournament prior to the game. However, they had lost three of their last four games and needed some momentum for the home stretch of the regular season.

Many things went right for Williston in this district victory, but the start from Cade Welborn might have been the most influential. Welborn pitched the whole five innings and only gave up two runs and one hit, with seven strikeouts. Up until the top half of the fifth inning, Welborn had a perfect game intact and it was only a string of unlucky errors and mistakes that kept him from completing it.

Through 3 innings, Williston starting pitcher Cade Welborn has been lights out.

Welborn has thrown four strikeouts, allowing no hits after one time through the lineup. Red Devils lead after scoring two in the first inning.

Throughout the game, he had command of the strike zone and consistently put Crescent City hitters away with his curve ball.

Unexpectedly, Williston’s base running turned out to be a key factor in scoring runs in this game. Right off of the bat, in the first inning, Jaron Cortese- pinch running for Welborn- stole second base to get into scoring position. On the subsequent at-bat, Connor Neal drilled a single up the middle, scoring Cortese. Neal did the same thing, stealing second, and the next batter, Jake Elder, also hit a ball to the outfield to score Neal from second base.

A consistent theme for the Red Devils was their drive to get runners in scoring position, and their ability to capitalize on those opportunities. They had three stolen base attempts in the first inning alone and seven for the whole game.

In the top of the fifth inning, the Raiders were able to score a couple of runs to make it a more interesting ballgame, cutting their deficit to 4-2. However, they quickly fell out of the game again in the bottom of the fifth. After Greyson Geiger made it all the way from first base to score on a ground out, and Logan Head mashed a two RBI-triple to the gap in right-center, Crescent City faced a 7-2 deficit and had to go to the bullpen. Dylan Cummings came on in relief for the Raiders, but unfortunately, Cummings just lacked control of the strike zone in this game. He entered the game in the bottom of the fifth with one out in the inning and left in the same inning without recording an out.

The first man he saw, Ethan Davis, ripped a triple into the gap to score Head from third base. After that, Cummings walked two and hit three. By the time he was subbed out, the score was 11-2. Hank Hamling took over on the mound with the bases loaded, trying to keep his team from getting mercy-ruled. However, he walked Jake Elder, scoring Geiger and the Red Devils walked off of the field with a five inning victory.

Cade Welborn was the clear difference maker in this game, throwing for five innings while allowing one earned run and striking out seven.

Starting pitcher C.J. Strange was again out in this game, still nursing his injured elbow. Coach Smith hopes that Strange will be healthy in time for postseason play. Until then, the Red Devils will need to hold onto their momentum from this victory, as they face a challenging opponent in the Trenton Tigers on Thursday at home.

The Red Devils strike for 8 runs in the bottom of the fifth! Dylan Cummings came on in relief for Crescent City and walked six batters before he was pulled.

The Red Devils take a dominant win by mercy rule.

I'm a third-year student at the University of Florida passionate about storytelling and sportswriting. My goal is to work in communications for a professional sports team after I graduate.
Previous Florida Beats FAMU in Midweek Game to End Home Stand
Next Williston Softball Rides 10-run Inning to Beat Crescent City 18-5