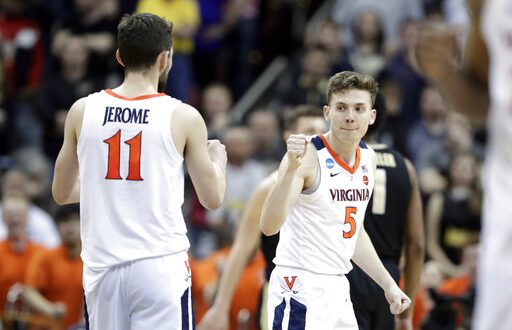 The  No. 5 Auburn Tigers are about to take on the No. 1 Virginia Cavaliers in a battle for a spot in the NCAA National Championship game.

The phrase “unfinished business” has become a motto for Auburn basketball this season. The Tigers have surpassed expectations this season. They overcame the odds to win the 2019 SEC Tournament and have continued their strong play into the spectacular NCAA tournament run they are on.

Auburn coach Bruce Pearl said that his team wasn’t satisfied with just winning the SEC tournament, and that the Tigers are focused on “advancing in the tournament.”

Last season, the Virginia Cavaliers became the first ever No.1 seed to lose to a No.16 seed. It was a historic loss for the Cavaliers, but Tony Bennett and his team have found bounced back in a huge way. Virginia got off to a dangerous start in the tournament.

They were down double-digits to the 16th-seeded Gardner Webb. It looked like a repeat of history was possible, but the Cavaliers fought back and advanced. They beat Oklahoma, then scraped by a hot Oregon team, and narrowly escaped with a win against Purdue thanks to Mamadi Diakite’s game-tying shot.

In case you were under a rock when Mamadi Diakite gave the ‘Hoos new life!

Virginia coach Tony Bennett says his team is “resilient.” For Bennett, Ty Jerome and Kyle Guy embody the resiliency of the team.

Behind Bryce Brown and Jared Harper, the Tigers have made more threes than anyone in the country at a 38.3% clip. The Tigers are all about pace and space. The Virginia defense, however, is all about slowing teams down and limiting open looks. The Cavaliers have limited opposing teams to just 28.7% shooting from beyond the arc this season. Coach Pearl commented on Virginia’s defense:

Auburn has made a living on turning teams over. They are sixth in the nation in forced turnovers. Virginia, on the other hand, is second among all NCAA teams in fewest turnovers per game.

The Cavaliers only turn the ball over around 9 times per game. It’s going to be very tough for Auburn to rely on forcing turnovers in this game, and they might have to focus elsewhere on the defensive end.

Much of this game will be decided by the guards. Auburn has the deadly duo of Jared Harper and Bryce Brown. Brown is leading the team in scoring with 16.0 points per game.

He is also shooting a blistering 41.0% from deep this season. Harper is both a very talented scorer and playmaker. He’s averaging 15.4 points and 5.8 assists per game. Both Brown and Harper have been extremely reliable scorers for the Tigers, and especially in late-game situations.

Bryce Brown declared himself and Jared Harper the "best backcourt in the nation."

It's a claim backed up by the former assistant who discovered them. It's also one Bruce Pearl isn't ready to make.

“We’ll go see who the best backcourt in the country is.” https://t.co/Rv4GedvpxM pic.twitter.com/xoYv0ZtCQB

Virginia has rolled out lineups with more than two guards for the majority of the season. Among the guards on the roster, Kyle Guy and Ty Jerome have stood above the rest.

Guy is leading the team in scoring and minutes per game as he’s scoring 15.2 points and playing around 35 minutes a game. Jerome is averaging 13.3 points and 5.4 assists per game.

Virginia and Auburn will battle it out on Saturday night at 6:09 p.m eastern. TV coverage is on CBS and radio coverage will begin on 98.1 FM / 850 AM shortly before the opening tip.