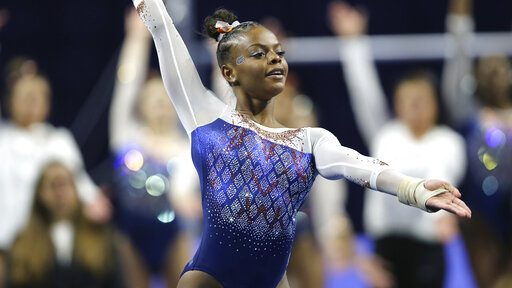 The Florida Gator gymnastics team had its season come to a close this past weekend as the Gators did not advance to the NCAA Championship to be held in Fort Worth, Texas from April 19-21.  Florida fell just short of advancing, finishing third in the NCAA Corvallis Regional this past weekend. The Gators were two-tenths away from advancing.

Denver won the NCAA Corvallis Regional at 197.375 while Oregon State claimed the other advancing position (196.90).

The Gators found themselves struggling early after opening the meet on balance beam. Florida was forced to count a fall toward its team total for the first time this season.

” This was not a night that I foresaw coming whatsoever,” said Gator coach Jenny Rowland. “This team has been confident and consistent throughout this season. After the problems on the first event, this team came to life. I saw them building on each other through the rest of the competition. They fought, but it wasn’t enough. Too many major mistakes and too many little mistakes cost us tonight. The Gators beat themselves. We missed an opportunity.”

Despite having trouble on the balance beam, Florida did turn in the highest team total for vault and floor exercise.  In the vault, the Gators put up a score 49.375 and on the floor, they put up a score of 49.425. But despite the nearly perfect scores the Gators could not close the gap to claim an advancing position.

“We will learn from this experience as it will sting for quite a while. This is a team with a lot of heart and pride. I know they will use this to get better,” said  Rowland.

Some Gators Moving on

Although the team did not qualify, four Gators did advance to the NCAA Gymnastics Championships as individuals. They will compete in NCAA Championships Semifinal II on April 19.

In Corvallis, Savannah Schoenherr equaled her collegiate vault best of 9.90 topping all vault competitors in both NCAA Corvallis Regional semifinal and final competition which made her advance and win that event.

Freshman Trinity Thomas’ winning 9.975 on floor exercise was the high score for any event for the NCAA Corvallis Regional she also took first on bars with a score of 9.925. She will compete in both bars and floor.

You can catch these four gators when the NCAA Championships Semifinal II begins on April 19th at the Fort Worth Convention Center Arena.