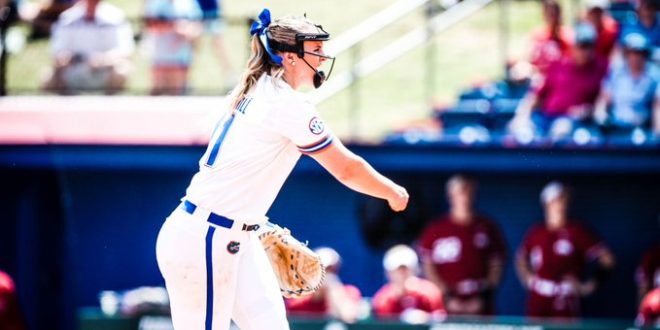 Arkansas struck first with a solo homer from outfielder Katie Warrick in the top of the second inning. That would be the only run the Razorbacks would get on the day and in the series.

Senior outfielder Amanda Lorenz was the star for the Gators today with the bat. She had two hits and two RBIs on the day as Florida outscored Arkansas 14-1 in the series.  Florida tied the game in the second inning on an RBI ground out by Jade Caraway and took a 2-1 lead when Lorenz plated a run with a single.   Florida would score an insurance run in the fifth on an RBI double from Lorenz.

Kelly Barnhill was yet again spectacular, pitching a complete game while just giving up two hits and striking out eight. It was her second complete game of the weekend as she shut out Arkansas in the first game of the series.

Coach Tim Walton’s squad was strong in the field as they didn’t record a single error over the weekend. This is a strong sign as the Gators had some defensive issues earlier in the season and had a strong showing against a top 25 team.

The Gators will take on USF this Wednesday in Katie Seashole Pressly Stadium at 7 p.m. Florida defeated the Bulls 7–1 the first weekend of the season in Tampa.

Florida gets back to SEC action when they head to College Station next weekend to take on Texas A&M. The Aggies are coming off a series loss to the Georgia Bulldogs.