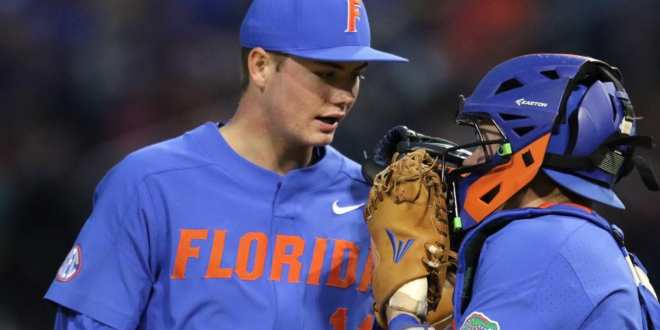 Florida’s baseball team (26-15; 7-10) continues to search for their first SEC series win on the road this season.

The Gators failed to accomplish just that on Friday. Following a 16-9 win on Thursday over the Tigers, Florida was throttled 13-1 by LSU in Game 2 of the series.

He was unable to keep the flood gates closed. The Fort Myers native conceded five runs on seven hits in just 1.1 innings. Essentially, it put this contest out of reach for the Gators in the middle innings.

The stage is now set for Saturday’s rubber match. First pitch is set for 3 p.m. ET from Alex Box Stadium.

Scott opened the season in fine form. He was one of O’Sullivan’s most reliable arms out of the bullpen early on. He conceded just four earned runs in his first 20 innings this season. However, he’s been shelled by three tough SEC opponents since.

The freshman has now allowed 17 earned runs in 14 innings on the hill against Ole Miss, South Carolina and LSU. Against the Tigers, he was lifted during the 4th inning after an RBI single by 2B Brandt Broussard.

Granted, at that point the score was still 3-1. But Specht couldn’t prevent the Tigers from tacking on two more runs in the 4th frame. An inning later, they’d add on four more runs of offense against Specht.

Cory Acton‘s home run in the 4th inning would be Florida’s only offensive showing in Game 2. LSU’s freshman starter, Cole Henry (4-2), wasn’t short of spectacular on the night. He struck out 12 hitters, walked none, and provided his team with 5.1 innings of work.

O’Sullivan is still looking for more consistency from his pitching staff. Their inability to keep his team in some ballgames has resulted in some lopsided score lines in conference play this season.

Florida’s offense could only muster seven hits and that lone run. Although, it was the first time the Gators had been held to one run since April 9 (five games).

Once again, the Gators get a second shot at their first SEC series win on the road in the series finale. Florida then returns home to host FAU on Tuesday at McKethan Stadium.

Sports media and management student at the University of Florida. Content creator for ESPN 98.1 FM/ 850 AM WRUF.
@TheEdgarChavero
Previous Gators Softball Drops Both Sides of Friday Doubleheader
Next Gator Softball: Florida swept at home by Alabama for first time since 2011