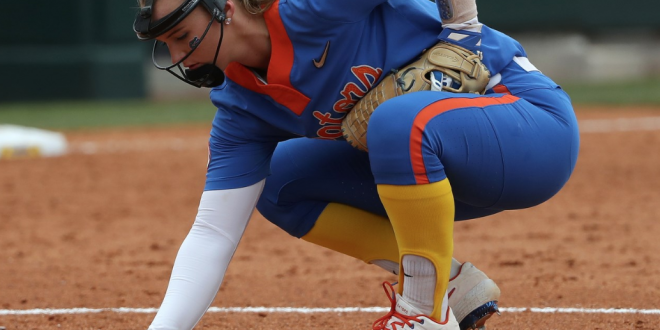 Gator Softball: Florida swept at home by Alabama for first time since 2011

For the first time since March of 2014, Florida’s softball team (37-12, 9-9 SEC) has been swept by an SEC opponent. The last time that happened was on the road to Tennessee.

On this occasion, more than five years later, the Alabama Crimson Tide (45-4, 14-4 SEC) did the trick, securing the sweep with a 3-0 win in Saturday’s series finale. This coming after they took Games 1 and 2 during Friday’s doubleheader in Gainesville.

In the finale, Patrick Murphy’s team would continue to out-pitch the Gators; his pitching staff held Florida to just two runs of offense in the series.

Despite a complete-game effort from Kelly Barnhill, (7 IP, 5 H, 3 BB, 4 K) Florida was held scoreless on Saturday by a pair of lively arms. Junior starter Krystal Goodman scattered six hits through the first four innings. Then, freshman Montana Fouts collected her fourth save of the season by closing out the remaining three frames of the game.

Florida will now have six days of preparation until their next contest. It’ll be another SEC matchup on the road against Auburn next Friday.

Alabama will play a midweek game at Belmont on Tuesday.

Despite not scoring in Game 3, an argument can be made that Florida had better at bats in the series finale than in the two previous games against the Crimson Tide.  Coach Tim Walton’s offense collected seven hits on Saturday after mustering just four in the doubleheader.

However, the clutch hit continued to evade them. The Gators left nine runners on base on Saturday as they squandered a fair share of opportunities.

In the third inning, designated player Jordan Roberts and first baseman Jordan Matthews both struck out with runners on second and third base and one out. In the bottom of the sixth inning, second baseman Hannah Adams lined into a double play in the same situation.

While Florida couldn’t capitalize on their scoring opportunities, Alabama was able to do so early on.

In the circle, Barnhill produced a solid effort against the Crimson tide on Saturday. It wasn’t her most dominant, but she kept her team in the game.

Alabama got their first run after she walked the leadoff hitter in the second inning; that runner would come around to score after an error by Matthews at first and a subsequent steal of home. The Tide’s insurance runs then came via the long ball in the fourth inning.

Essentially, the result of this series is a testament to the dominance and talent of Alabama. Florida came into the home series riding an eight-game win streak. They had collected series sweeps of their own in the SEC against Arkansas and Texas A&M.

Those memories are now well in the rearview mirror for Walton and his team.

Now, it’ll be important to note how they can rebound from the disappointment they suffered this weekend.