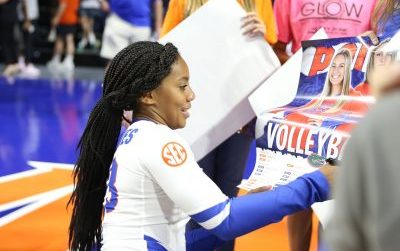 Prior to Being a College-Athlete

Hargreaves began playing club volleyball when she 12-years-old. She grew up in Tampa, Florida. Hargreaves is the daughter of college coach Vernon Hargreaves, Jr.  Eventually, she and her family stopped moving to be with her father while he coached and decided to call Tampa home. Hargreaves played for club team Tampa United, and qualified for Open Junior Nationals in 2012, 2014 and 2015. She played on her varsity high school team all four years and was named the 2016 Hillsborough County Volleyball Player of the Year. She also led the county in digs in her 2015 season. 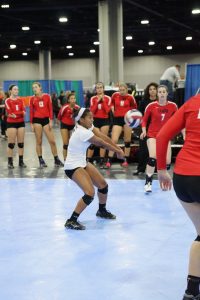 Hargreaves was a four-time honor roll student. As well as a volleyball player, Chanelle ran track at her high school in 2013 and 2014, and was awarded the Coaches’ Award in 2014.

Journey to Becoming a Gator

Many Gator fans may recognize Chanelle’s last name. Chanelle is the younger sister to Vernon Hargreaves III. Vernon made a huge impact on the Gator’s football team, considered to be a “Gator Great”. Who now plays on the NFL’s Tampa Bay Buccaneers.

Ultimately, seeing her older sister and then her brother Vernon attend UF. The school became home and she knew it would be the perfect fit for her once she received opportunities to play on the women’s volleyball team.

“I had a few other teams looking at me, but I think being around Florida for so long, I fell in love at a super young age,” said Hargreaves. “So when I got the opportunity to play here (UF) I knew this is where I wanted to be and where I wanted to spend the next four years.”

Not only did Hargreaves’ older siblings influence her decision coming to Florida, but her dad also played a huge role in deciding that Florida was the right choice. Her dad has coached football since she could remember.

Hargreave’s father and mother. Photo Courtesy: Chanelle Hargreaves“Having his perspective with the coaching and the recruiting. And just having sort of an insight on how everything works, was pretty beneficial,” said Hargreaves. “Because I really was brand new to everything. He helped with all the ins and outs. But also let me figure it all out on my own also. “

Hargreaves made it clear that her family never pushed her to be a college athlete. But instead supported her in whatever decision she was going to make regarding her future after high school.

Hargreaves, says her dad always pushed her to be her best and try her best. “He has a great perspective as a coach.” 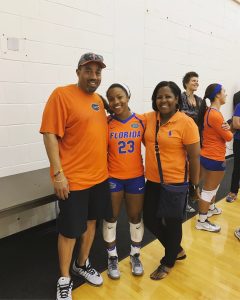 When asked who Hargreaves looks up to she responded with, “I think my brother because I have seen every stage of his career. Just this past year he got injured in the second game of the season and was out.”

Hargreaves was able to see how her brother fought through that injury and how much confidence he still had even with the injury. “It’s so inspiring to me, he’s my inspiration,” Hargreaves said.

Favorite Memory as a Gator

“I think my favorite memory was sophomore year when we played Georgia,” Hargreaves said.

The Gators were in the fourth set and they were down by 4 points. Hargreaves went on a three-point run to lead the Gators to victory.

Many of Hargreaves teammates enjoy the type of teammate she is and enjoys playing alongside her.

“She’s a calming factor in the middle of a pressure-filled drill or match. She knows exactly what to say to me to bring my focus back to what is most important. She never lets me forget to laugh while playing the sport I love. No matter how intense the game can get,” said teammate Allie Gregory.

“She made me feel like I belonged here from the minute I got here, she’s always there when I need someone to talk to, and she’s a consistently reliable person,” said Riley Fischer, freshmen on the volleyball team.

Life after Being a College Athlete

As Hargreaves approaches her last year at UF. She is now beginning to decide what she wants to do with her career.

She hopes to follow in her sister’s footsteps and get into college recruiting.

“Recruiting to me is, something that has really inspired me,” Hargreaves said. “Recruiting has a huge impact on kids. And when they get to the school that’s how it sort of molds them into the person they are going to be. “

She wants to be a part of getting student-athletes to where they want to be during their college career as well as after college.

“Being a college athlete, at the University of Florida has been nothing but rewarding, as always Go Gators,” said Hargreaves.

Bria Everett is a senior studying Journalism sports and media at the university. She has a huge interest in all things football and hockey and hopes to work for a team's social media department after graduation.
Previous FEATURE: Underwater Hockey, Yes, It’s a Thing
Next FEATURE: Kristina Moore Overcoming Obstacles