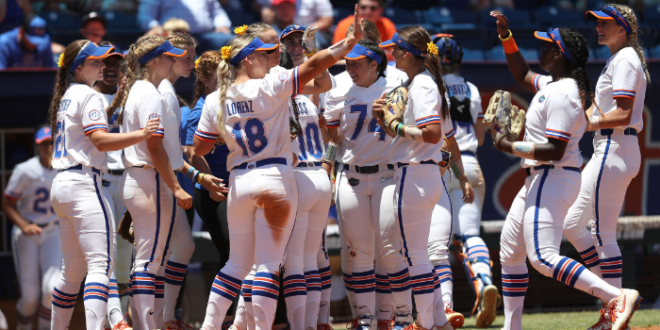 For yet another year the road to the Women’s College World Series goes through Gainesville, Florida.

THE GATORS ARE ON TO THE SUPER REGIONALS!

(5) @GatorsSB finishes off an undefeated weekend with a 5-0 win against Boise State in the Gainesville Regional Final.#NCAASoftball pic.twitter.com/rn24C5JTyR

Tim Walton on the weekend as a whole:

The Gators got things going early again. Amanda Lorenz led off the game with a single, advanced on a Kendyl Lindaman walk and was moved over to third by a Hannah Adams bunt.

Just like Adams with the passed ball on Saturday, Lorenz came home on a wild pitch by Kelsey Broadus. Lindaman would score on a fielder’s choice as Reynoso hustled to first to break up a double play.

A Jordan Roberts in the third extended the lead to 3-0. Then the hit of the day came in the fourth as Jaimie Hoover smoked a tank over the left field wall.

Lorenz said Hoover had a big grin on her face as she rounded third. She said it’s great to see her teammates’ hard work pay off.

Sophia Reynoso would score the fifth and final run of the game. She took advantage of Cheyenne Lindsey legging out an infield single to score from second base.

“To me, I thought it was a great gamble,” Walton said.

The right-handed Kelly Barnhill (32-11) gave six strong innings after essentially getting the day off with a two-inning performance on Saturday.

The Gator ace earned her ninth postseason win delivering six strikeouts to just one walk and two hits against the Broncos. In the regional she put up 15 scoreless innings with 14 strikeouts and six hits allowed.

She said her three appearances weren’t her best performances in the circle. But, getting an early lead has really helped take some pressure off her.

Boise State Head Coach Maggie Livreri said Barnhill was different from how they scouted her in terms of mixing pitches and planes.

“I was throwing more rise balls today, which haven’t been working in the last couple of days, so we were just trying to hammer it out to feel good,” Barnhill said. “I wasn’t able to spot up my fast pitches as well today, but that seemed to have worked out in our advantage.”

Katie Chronister and Elizabeth Hightower combined to get the final three outs. Walton tried to find opportunities to get different pitchers time in the circle.

Barnhill on getting some rest:

Barnhill, Lorenz, and Walton all spoke on how integral the crowd was for Florida all weekend. Florida saw an attendance of over 1,302 rowdy fans on Sunday.

Barnhill said the crowd has been nothing but engaging all weekend and there’s nothing better to have a crowd that’s behind them.

Lorenz on the crowd:

“It’s really impressive to have people come out and support our team,” Walton said. “And not only have our perform at a high level but our fans are performing at a high level as well. Just tell them all to hydrate and get yourself going next weekend, let’s hook it up.”

Florida has a revenge matchup with the Tennessee Volunteers for the Super Regional next weekend. The Volunteers took two out of three in Gainesville to start the conference schedule.

“We’re a totally different team than when we played Tennessee in the beginning of the season,” Lorenz said. “I think they would say the same thing about them(selves).”

Walton on the plan going forward:

The Gators now are just two wins away from another trip to Oklahoma City.