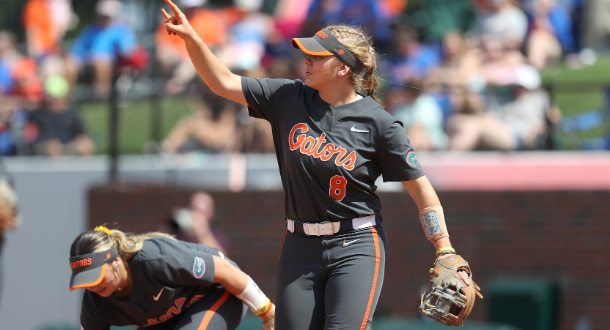 UF advances to the final of the Gainesville Regional with the win. One more win sends them to yet another super regional and they’d need to lose twice on Sunday to not accomplish that feat.

Early Production From An Unlikely Source

Six of Florida’s eight runs came from a two-out rally in the top of the first. Four of those were driven in by the bottom Florida’s lineup: Jade Caraway, Hannah Sipos, and Alex Voss.

Caraway led the way for Florida on offense. The NC State transfer finished 2-for-2 with three runs batted in and a run scored.

“I just wanted to come through for my team and get those runs in,” she said.” “Try to hit the ball hard and just stay within myself. Not to do too much, but just come through for the team.”

Her opposite-field blooper in the first helped give Florida a 3-0 lead. Hannah Sipos drove in a run of her own with a seeing-eye single. Voss slapped an infield single to bring home Caraway.

The lower third of Florida’s lineup finished the day 4-for-7 with four RBIs and two runs scored.

Walton on the bottom of the lineup’s production:

“(There’s) no bigger performance obviously than the two-out rally in the first,” Walton said. “It was great to see the bottom of the lineup turn it over and make things happen.”

Kelly Barnhill got some much-needed rest and allowed for another pitcher to shine. Lugo and Barnhill combined for the no-no but the sophomore from California showed out.

Lugo had three perfect innings to earn the win in her first postseason appearance. She said postgame she tried not to think about the no-hitter too much.

“I saw it on the board in like the fourth inning and I just kind of let it go and tried not to think about it too much,” she said. “And just focus on letting my defense work and throwing pitches. “

Lugo said she wondered if she would get to pitch after Walton asked assistant coach Mike Bosch if any pitchers were warm. Walton said after the sixth run he realized he should get someone else in the circle to give a Barnhill a break.

The sophomore second baseman went 2-for-2 with two runs scored Saturday afternoon. That gives her 10 hits and in her last seven games. She had clutch hits in multiple SEC Tournament games and is making a case for some Regional accolades as well.

Adams on the team’s mindset at the plate:

She recorded multiple hits in four of those seven games. Her batting average jumped to .284 after the win and her on-base percentage sits at .402. One thing for her though has been her performance following a big game.

Bu in her two regional games she is 3-5 with two runs scored, a double and two RBIs.

Walton on his team’s transformation:

The Gainesville Regional Finals start at 12 p.m. Sunday. The Gators will face whoever comes out of Saturday’s loser’s bracket. Florida would have to lose twice to miss out on a Super Regional but only win once to advance.