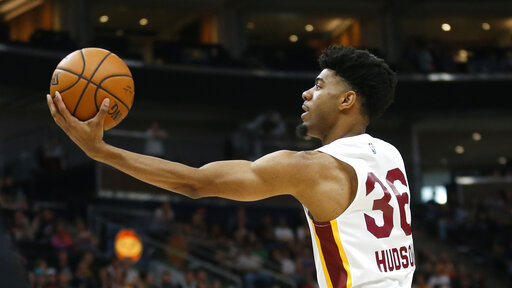 Cleveland Cavaliers Jalen Hudson (36) lays the ball up during the second half of an NBA summer league game against the San Antonio Spurs Monday, July 1, 2019, in Salt Lake City. (AP Photo/Rick Bowmer)

As the NBA offseason frenzy comes to a close, the Summer League is in full swing and features a few former Gators.

Former All-SEC guard Chris Chiozza has made an impact on the Houston Rockets Summer League team. The Rockets signed the former Gator at the end of last season. This summer, Chiozza has played some big minutes.

Chiozza has carved out a solid role for this team. He’s averaging 8.5 points to go along with six assists. He was big contributor in last night’s 87-78 win against the Utah Jazz. Chiozza finished with 12 points and five assists in 27 minutes of work.

Chris Chiozza showcases the handles & dumps it off to Gary Clark for the slam! #NBASummer

Chiozza remained with the Rockets throughout the postseason last year. With his success this summer, the Rockets could have future plans for him. His play can lead to some consistent minutes next season.

Since graduating from Florida, Canyon Barry has been able to land solid minutes in the NBA G League. Back in an NBA uniform, albeit the Summer League, Barry has struggled getting consistent playing time for the Minnesota Timberwolves. That being said, one thing he doesn’t struggle with is his free throws.

As the Summer League enters the playoffs, Barry will look to get an uptick in minutes as the Timberwolves are just one of three teams still undefeated in the short season.

Hudson had an up-and-down final season for the Gators which led to him being undrafted. He landed on the Cleveland Cavilers summer league roster with the intention of turning heads and generating it to an actual roster spot.

He’s struggled to carve out a consistent role thus far, but still has a couple games left to prove it to the coaching staff.

Still just 23, Hudson, along with these other Gators, will have some time to prove their worth to the rest of the NBA. These former Gators face an uphill battle to achieve their NBA dreams. However, they’re used to challenges on the court through their time at Florida.