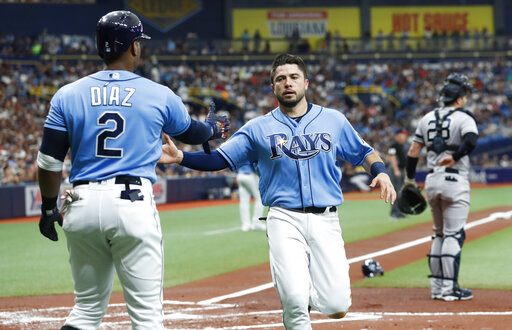 Rays Open Second Half against Orioles

The Tampa Bay Rays will take on the Baltimore Orioles tonight at 7:05 in Oriole Park at Camden Yards. This will be the first game of the four-game series.

The Rays are entering tonight’s game with a 52-39 record while the Orioles stand at 27-62. Additionally, this will be the first game back from the All-Star break for both teams.

Tampa is second in the AL East while Baltimore is last in the division. However, the Rays are just 17-19 in their last 36 games. Tampa will start Yonny Chirinos, who has 81 strikeouts in 18 games and is sporting a 3.15 ERA. Dylan Bundy will take the mound for the Orioles. Bundy has a 4.65 ERA and has 96 strikeouts in 17 games and 17 starts. However, Bundy is just 4-5 against the Rays in his career.

All-Star pitcher John Means will be there to help carry the load for the Orioles. Means is 7-4 with a 2.50 ERA and the 26-year-old rookie could be big going forward.

The Rays have seen their bullpen suffer multiple injuries. Pitchers Jose Alvarado (right oblique strain) and Chaz Roe (right flexor strain) are both on the Ray’s injured list and are not expected back until August. Fortunately, the Rays will be getting back pitcher Diego Castillo after dealing with shoulder inflammation. Despite the recent injury bug, the Rays have the lowest ERA in the majors at 3.32 heading into tonight.

Coverage on WRUF starts tonight at 6:30.