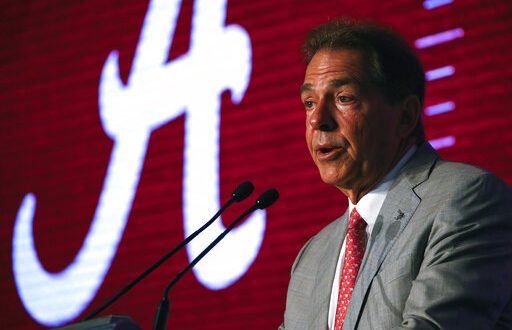 Nick Saban Discusses How Alabama Will Bounce Back

Saban said that the most important thing this offseason for Alabama was reestablishing their identity, mentioning the “Alabama Factor.”

He was very pleased with the new additions to his coaching staff. However, he also said that continuity is important, building relationships with the players. Saban also mentioned that, despite adding Steve Sarkisian on offense and Pete Golding on defense, they will not change their system.

Nick Saban also spoke on the transfer portal in college football, saying it has become almost like a “free agency.”

New NCAA transfer guidelines have been implemented into college football. This includes a provision for undergraduate transfers, stating that a player may not have to spend one year-in-residence if ” the transfer is due to documented mitigating circumstances that are outside the student-athletes control and directly impact the health, safety, and well-being of the student-athlete.”

This offseason, Saban has harped on Alabama’s play in the second half of last year’s season.

Alabama dominated the first half of last year’s season. This caused many to miss the little things they were having trouble in. This even included the players and coaches.

In the SEC Championship Game, they barely held on to beat Georgia. This was due to the great play of the backup quarterback, Jalen Hurts. They then held on to beat Oklahoma in the National Semi-Finals.

After getting off to a huge lead in the first quarter, Oklahoma fought back. Alabama got off to a booming 21-0 lead but ended up winning 45-34.

The 44-16 loss was the largest of the Saban era. Saban hopes Alabama will bounce back and win another title, which will be his seventh.