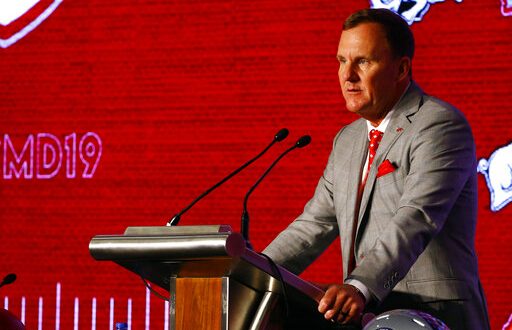 Head coach Chad Morris and the Arkansas Razorbacks are coming off a terrible season, with a record of 2-10.

While at SEC Media Days, he was asked many questions about the difficulty of bouncing back, and recruiting coming off of that season. Morris was very excited about the way his recruiting class was going, even after a season like that.

When it comes to special teams, Arkansas weakness last year was their punting. This offseason, they added a new punter to the list, Sam Loy, to add to the competition.
Morris mentioned the lessons he learned after the 2018 season. The head coach said he recognized how the SEC was a line-of-scrimmage type of league. This is why it was his main focus recruiting this offseason.

He was also asked about the transfer portal, and the way that it might affect his team heading into next season.

Morris then went into his offense, how excited he was, and his expectations for that side of the ball. He mentioned that their offensive philosophy isn’t going to change. Morris also talked about the quarterback competition.

He also talked about his defense. On that side of the ball, his team has the pieces to make an improvement this year. He talked about Kam Curl and Joe Foucha, and how excited he was about the back end as well.

Arkansas is hoping for a big bounce back year. After having a year’s experience in the league, hopefully Morris can take the lessons he learned, and turn around the program this coming year.