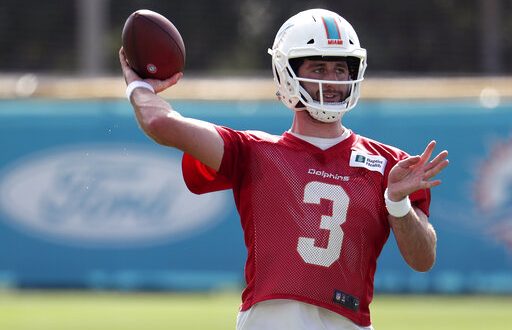 The Miami Dolphins being a new era under new head coach Brian Flores at training camp. This team is going through a complete culture change from last year’s underwhelming season.

Josh Rosen, prior to OTA’s, was excited to get back on the field:

Great to get back on the field and just play football #FinsUp pic.twitter.com/t519EATde9

You know he’s excited for his first training camp with the Dolphins.

The Dolphins are looking to bounce back from a 7-9 record in 2018, finishing 2nd in the AFC East, four games behind the Patriots.

They are hoping the addition of quarterback Josh Rosen, acquired during the NFL Draft via trade, will help with the quarterback position. Rosen will have to battle with Ryan Fitzpatrick for the starting position. Trevor Sikkema talked about the quarterback situation in Miami:

There is no question that their quarterback situation is much better than when they had Ryan Tannehill last year. This will be dependent though, on whether or not Rosen was just a product of a bad scheme in 2018 and bad coaching, or if he simply doesn’t have the talent.

Although he was able to bring coaches from the Patriots, they are inexperienced at the levels they will be coaching. Even though they were all winners with the Patriots, sometimes experience can be the most important things when it comes to high coaching positions.

A great example is Chad O’Shea. O’Shea has been in coaching since 1996. His first NFL gig was in 2003 as a volunteer assistant with the Chiefs. In 2004 and 2005 he was a assistant special teams coach. He was with the Vikings from 2006 to 2008 mainly coaching wide receivers, and in 2008 joined the Patriots.

With Flores’ coaching pedigree, the Dolphins hope he can change the mediocre culture of the team. Flores looks to lead the Dolphins to a glorious era for the franchise.