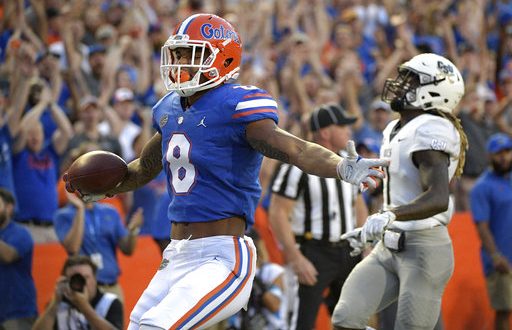 With the Florida Gator football team back on the practice fields, the wide receivers seem to be the driving force.

In 2018, Trevon Grimes had quite a season. After transferring from Ohio State, he made an immediate impact on the receivers and on the Gator offense as a whole. He walked out of last season with an average of 14.0 yards per catch and 364 receiving yards under his belt. An impressive accomplishment from the 2018 season was his performance in the win against Florida State in the regular season finale. He not only got a touchdown, but caught five passes for 118 yards.  The 118 yards alone was a top accomplishment by a Florida wide receiver last season.

Grimes explains that the receivers have been so successful in practice because of their strong bond on and off the field.

Last season, Cleveland averaged 11.8 yards per catch and 212 receiving yards. Last year he was a big help in the Idaho win with his three catches for 51 yards. He was also a nominee for the Preseason Earl Campbell Tyler Rose Award, given to the player who best exudes characteristics such as integrity, teamwork and sportsmanship.

He says the team’s goal is to make it to the National Championship this season.

In the 2018 season, Toney was a do-it-all guy for the Gators. He averaged the season with 10.4 yards per catch and had 260 receiving yards as a receiver. His greatest games include Missouri, with 2 reception in 72 yards and Idaho with 6 in 54 yards. He was on the SEC Preseason Second Team. He’s also been known to throw the ball on some trick plays.

He says he has tremendously grown as a receiver.

The first game of the Gator season is Aug. 24 against Miami in Orlando.

Sara Dastgerdi is a current student at the University of Florida.
Previous Astros’ Deadline Acquisition of Zack Greinke Shifts Power in American League
Next Running Back Depth is a Strength for the Gators in 2019